Woo Woo Woo! You Know It!

Zack Ryder is a wrestler for WWE, having been an internet phenomenon in 2011 after a surge of popularity thanks to his Youtube show, Z! True Long Island Story. This newfound popularity propelled him to the biggest victory in his career, when he won the WWE United States Championship. However, his backstage attitude didn't go over well with management and as a result, he had a hard time getting further up the ladder. After being a sacrificial lamb in the Cena / Kane feud, Zack became one of of WWE's biggest jobbers, and did nothing but complain on Twitter and occasionally lose to Ryback in squash matches.

His career could be summed up pretty well by this video.

After falling down further, he spent the latter half of 2015 in NXT, forming a tag team with Mojo Rawley, The Hype Bros., before returning to RAW just before WrestleMania 32, where he won the Intercontinential Championship in a 7-Man Ladder Match.

Also he wrestles in some other show, apparently.

With his loudmouth style and horrendous win/loss record, Zack Ryder was a perfect fit to square off against VGCW's king of Jobbers: Gary Motherfucking Oak. Zack made his VGCW debut on December 3rd, sporting a different theme song than usual. The two worst at their sport put on a surprisingly exciting back and forth match, and after taking several low blows, Ryder managed to disregard Gary's massive girth to pick up a victory, chalking up the score to 6-5 and bringing WWE only one win away from catching up to the competition.

Ryder however made a VERY brief return at End Game X1 with him singing "Friday" to audition as King Vegeta's Court Jester....It didnt go well. 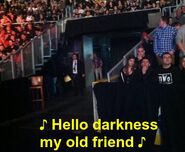