Wario Ware Inc. was a tag team consisting of Wario and Waluigi, named after Wario's company. They are former Co-Op Champions, having won the titles after defeating Gerudo Skies at End Game 4.

Wario Ware Inc. had a rocky start, both of their early contests ending in defeat. During their second contest against Gerudo Skies, Waluigi was disqualified, which left to Wario having to fend off the two combatants for a lengthy time, managing to pin Ganondorf before finally succumbing to defeat at Zangief's hands. The two took a lengthy break after that match, not competing for the rest of December or January.

The team reunited and picked up their first win against The Practice on 2013-02-01. They tried to use this victory as momentum when the pair entered the second tag team tournament, held on 2013-02-10, but were defeated by The Saiyans in the first round.

Disqualification woes struck the team again when they faced The Elite Two on 2013-02-22, though there was considerable controversy. Wario had seemingly sewn up the match when he went for a submission on Raphael. Ezio ran in to save Raph, and Waluigi ran in to protect Wario. The Referee then began to count down the time until the illegal wrestlers were disqualified. However, Wario in the meantime had pinned Raphael; Ezio began to approach his partner, while Waluigi blindsided the assassin. The referee however, had not noticed Wario's long pin and instead after several seconds claimed that WarioWare was disqualified, despite the fact that Ezio had been in the ring just as long as Waluigi. Rumors circulated at the time that Thomas McRef was bought and paid for by the Elite Two.

The corporation hit the lowest point of their tag team career against The Practice on 2013-03-19. Though Wario dominated the first minute, all he got for his efforts was getting slammed through a barricade and busted open minutes later. While he put up a valiant effort, Wario got thoroughly roughed up by the good doctors and finished the match looking like he could sue for malpractice. This loss led to the team taking another two month break.

They attempted another comeback on 2013-05-15, against Dream Teamcast this time, in one of the longest tag team matches in VGCW history, clocking in at around 27 minutes. This match saw quite a bit of teamwork, including the competitors being thrown out of the ring near their partners leading to many 2 on 1 situations. Segata and Waluigi were both beaten and bloodied during the match and it looked like Ryo had the match wrapped up at one point after spearing Waluigi through the barricade, but when he would have almost certainly gotten the count out win, he opted to leave the ring to reset it. Wario and Waluigi did not let this opportunity slip away and were able to pull off a team maneuver on Segata to put him away before Bazza called the match a draw, giving Wario Ware Inc. only their second win as a tag team.

Despite the flawed finish, Wario Ware Inc. earned themselves a chance to become the #1 Contenders against the Super Mario Bros. on the 2013-05-29 broadcast. Wario, sporting a new physique, was able to weather whatever either Mario bro could throw at him. Even Waluigi pitched in as the two finally showed some semblance of teamwork, and it was enough for the two to earn themselves a rematch with Gerudo Skies. WarioWare inc. would need to pull off one of the biggest upsets in VGCW history to become Co-Op Champions.

The two would meet three short days later at End Game 4, WarioWare and Gerudo Skies finally facing off in a rematch more than five months in the making. This match was slightly different than Gerudo Skies' past title defenses, being a Tornado Tag match with all four competitors active, mirroring the two teams' prior encounter, though this time elimination rules were not in effect. Some expected the might of Ganondorf to end the match quickly, but in a complete reversal of expectations, Waluigi held his own against Ganon for most of the match, even drawing blood from the Dark Lord first. Meanwhile, Wario and Zangief traded blows, and after several minutes of beatings on both sides, the two switched targets... and while Wario kept Ganon occupied, Waluigi was able to pin Zangief, taking the match for WarioWare. Gerudo Skies had been dethroned after 104 days, and Wario and Waluigi walked away champions.

Their luck would soon run out however, as Wario Ware would lose the gold just as quickly as they earned it, dropping the belts to GameCenter FU in their first defence. This would do little to hinder the team however, as they would go on to be heavily involved during the hunt for the dragon balls, wanting to use them to wish for "all the money in the world." They worked together to attack Eggman backstage and steal one of his dragon radars, before doing the same to Dr. Wily. They discovered that Barret Wallace had a dragon ball, and Waluigi added himself to the match between Wallace and Adam Jensen. Waluigi won the resulting triple threat match, and stole Wallace's dragon ball. Wario would go on to ambush Segata Sanshiro after his Casual Championship defense aganst Duke Nukem and steal his ball, putting Wario Ware in the lead in the dragon ball hunt. Wario would increase that lead further by defeating Chief Arino in a match for his dragon ball.

However, they ran into some issues obtaining their fourth dragon ball, due to the fact that it was held by Bowser. Waluigi attempted to steal the ball from him, but Bowser "threw him all over the car park and completely trampled him." Wario went to GM Gabe Newell and asked to fight Bowser one-on-one. However, Adam Jensen was already booked in a match with Bowser. Wario attempted to ambush Jensen backstage, but was defeated. Jensen would go on to fight Bowser and lose, however, Bowser's dragon ball would be stolen the following week by Gabe. Despite this setback, Wario Ware were still leading on dragon balls... until they were attacked backstage by Nappa and Flint and had them stolen. This put them out of the dragon ball hunt for good.

At End Game 5, Nappa and Flint managed to gather all of the dragon balls together and were going to wish to resurrect Vegeta. However, the balls were stolen by Kefka, who used their power to become a god in human form and attempt to destroy the world. Wario Ware joined The Practice, Safety Valve, and Space Cowboys in the effort to stop Kefka and save the world, which was ultimately successful.

Wario Ware would return to tag team action next week, in the first episode of Season 6, and the first official stream using WWE 2K14. Although they had a strong initial showing, the superior teamwork of Sonic & Knuckles eventually got the better of them. Their next match as a team would be a victory over Shadaloo after Waluigi pinned M.Bison. Wario Ware would spend most of Season 6 in an amusing mini-feud with Kefka, in which Wario would act as Waluigi's manager and vice-versa. The manager would constantly distract the referee, making it very difficult for Kefka to score pinfalls.

Wario Ware's next tag team match would come in Season 7, when they faced off against Donkey Kong and his new tag team partner Diddy Kong. They would ultimately lose this match due to a hilarious example of 2Kuality, where Wario was unable to get out of the ring after tagging out, and was disqulaified after a five-count.

A few weeks later, Waluigi would win the Casual Championship from Dracula, becoming the first ever two-time Casual Champion. Shortly after this, Wario would surprisingly enter a No. 1 Contenders match for his brother's title, which he ended up losing to Gray Fox. This hasn't seemed to have affected their status as a tag team, as they entered a No.1 Contenders tournament for the Co-Op Championship together. However, they were knocked out in the first round by The Dragons.

Like many of VGCW's Tag Teams, Wario Ware has a tendency to be carried by one half of the team. However Waluigi, the weaker half, suffers less from overall consistent poor performance than wildly swingy performance. While this has made for a poor singles career overall, on the right day, it can make for an extremely effective tag team partner. Whether Waluigi lives up to that potential varies heavily: at times he tags in and out at exactly the right times, but equally often he is completely uncooperative. Wario is similarly inconsistent, varying between an unstoppable powerhouse and a helpless punching bag. As a result Wario Ware has enormous potential, but very rarely lives up to it. 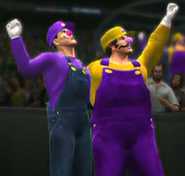 The WAAAAAHrio bros after a victory
Community content is available under CC-BY-SA unless otherwise noted.
Advertisement