Start a Wiki
Everybody deals with grief differently, right? Some people fuck at funerals...I cut off heads.

Travis Touchdown is the protagonist of the No More Heroes series, and a Wrestler for VGCW. He is a graduate from EDBW, where he formed an alliance/rivalry with Dante dubbed The Fuckheads, and was voted into the first Star Road, where he finished as the runner-up.

In No More Heroes SeriesEdit

Travis Touchdown is your typical American otaku, living alone in a motel in the town of Santa Destroy, playing Video Games, and watching Anime and Wrestling tapes with his cat. That all changes when he wins a Lightsaber Beam Katana in an online auction, making him broke. Desperate for cash, he takes up an assassination job from the mysterious Sylvia Christel, and finds himself dragged into the UAA (United Assassins Association) when he kills the #11 Ranked Assassin, making him a target. Realizing that it was kill or be killed, and with the promise of sex, Travis slaughtered (almost) all of the other 10 Assassins to become #1, becoming a hero to the people of Santa Destroy.

Three years later, his best friend is killed by hired thugs of Jasper Batt Jr., the head of Pizza Batt. Enraged by the loss of his friend, Travis climbed the ranks again (all the way from #51!) to get his revenge.

Travis Touchdown was an individual who had long been requested to join the VGCW. Because of this, he was one of the 16 Superstars voted into the first Star Road Tournament, and despite taking out the Fan-Favourite King of All Cosmos in the Quarter-Finals, many saw him as the last hope to stopping eventual winner Illidan Stormrage from winning the tournament to no avail. Travis was later transferred to EDBW with other Star Road alumini, and even teamed up with Dante.

Season 9: Pin or Be PinnedEdit

3 EDBW callups and 10 months later, Travis was finally called up to VGCW. In his debut, Travis beat Break Man with Air Man in his corner, who had turned heel the show prior at End Game 8, and held a promo earlier that night. Travis his comeback, then immedietaly went outside the ring to strip the table, and come back to the ring and use his finisher. Coming of his debut, Travis looked to quickly rise through the ranks to become the number one wrestler. While asking around backstage, The Heavy proclaimed that he was the strongest and the two engaged in a backstage brawl, with The Heavy prevailing. In his next match, Travis lost against Segata in triple threat elimination.

A month after his debut, Travis was interviewed by Kefka about his tag team run in EDBW. When asked about leaving his teammate Dante behind, Travis said he did not have any regrets and had nothing left in the minors. Then, he was immediately assaulted by Dante, who came out of nowhere. Travis called him out on the next show, and the two exchanged gratuitous amounts of verbal insults. Before a brawl would begin, Baz McMahon intervened and booked the two in an Extreme Rules match. In this grudge match, Dante reversed most of Travis' finisher and pinned him. To further anger Travis, Dante eliminated him from the 2014-12-23 Royal Rumble. Travis got another shot at Dante during a six-man tag team match. While Travis pulled his weight, one of his partners, Scorpion, tapped out from a Red submission to give him yet another loss and Dante even more leverage in the fued.

At End Game 9, Travis would be inserted into a six-man content by his arch nemesis Dante to crown the king of the new school. Travis, perhaps waiting for Dante to be weakened by Johnny Cage before getting his revenge, went after the newcomer Professor Layton. However, the Crownless King underestimated the brutality of the fine gentleman and was pinned following a Brainbuster. While Travis was the second man eliminated, he outlasted Dante, who was not prepared for Johnny Cage.

Travis opened Season X with a singles match against Duke Nukem. Travis stole Duke's stunner during the middle of the match, but failed to pin Duke and lost. A month later, he faced Dracula and managed to win. In backstage, Travis was ordered to fix a broken vending machine by GM Gary Oak. After Travis talked to others backstage and took various tools, Sabin was injured in an accident and blackmails were sent out to Duke Nukem, Dante, and Dracula. All three wrestlers were related to Travis through his match, and Miles Edgeworth quickly made the connection. At the Challenge Tower PPV, he accused Travis of being the blackmailer and explained his reasons. However, Phoenix Wright came out to defend Travis, and accused Edgeworth before Gary Oak told all of them to leave the ring.

Travis confronted Edgworth backstage two weeks later, claiming his innocence and that Phoenix will defend him successfully. He turned his focus on matches, and faced Goemon in singles. Similar to his match against Dracula, Travis pinned him with a Thunderfire Powerbomb.

With this momentum on his side, he was prepared to defend himself in court against Edgeworth at End Game X, ready for whoever the culprit turned out to be. Edgeworth called his first witness to the stand, Dante, and immediately started asking questions. Little did Dante or Travis know that Edgeworth had other plans for the trial, as he pulled a few fast questions on Dante that caused him to incriminate himself. Oops. As it turns out, Dante was the one who had been leaving all those threatening notes to everyone. Not only that, he forged two Legends contracts for some of the biggest stars in the league, attacked Sabin, and framed it all on Travis, all in the name of eliminating the competition and get a fast track to the championship once again. Dante confessed, and the only thing Travis could think about at that moment was one final Extreme Rules Falls Count Anywhere match against his biggest rival, which they immediately held right there. Dante had the upper hand at first by getting to use the Fuckercut before Travis could pull anything else off, but Travis decided to take a page out of his initial match with him and steal the Fuckercut just for revenge's sake. And after one more brutal fight with all the weapons under the ring, Travis finally got through his Desperate Struggle and hit Dante with a Regalplex, securing his victory and ending the feud with him at last.

But this wouldn't be the last time Travis would see Dante, far from it. Gary pulled the two of them aside and told Dante that he was on his last warning, but also told the two of them that they need to get their act together because he was forcing the re-forming of their old tag team from the developmental days: The Fuckheads. Maybe these two can be professional enough to put aside their differences just once. Probably not, but maybe. 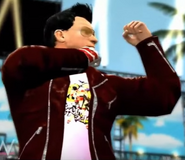 Travis in the Summer.
Add a photo to this gallery

Retrieved from "https://vgcw.fandom.com/wiki/Travis_Touchdown?oldid=38224"
Community content is available under CC-BY-SA unless otherwise noted.