Start a Wiki
Now then...does your home not seem a teensy bit on the wee side? Yes, yes, I have to say I do feel a slightly larger home would suit you much better, hm?

Tom Nook is one of the main non-playable characters in the Animal Crossing series and a wrestler currently employed in EDBW. He and Recette Lemongrass form Nookettear, Inc. alongside their employees Mona and Sketch Turner.

In the Animal Crossing SeriesEdit

Star Road 2: Trouble With the LawEdit

As one of the 32 wrestlers selected in the first phase of Star Road 2, Tom Nook was voted into the tournament by the fans, giving him a shot at becoming part of the VGCW roster. It turned out that Tom Nook's shady dealings and lack of pants would come back to bite him, as he was matched up against ace prosecutor Miles Edgeworth in the first round. The law won out over the indecent tanuki, forcing Nook back to business outside of the ring.

Months later, it would be seen that Tom Nook had taken his talents to Extreme Dudebro Wrestling. He and his business partner Recette Lemongrass brought in Mona after a hostel takeover of Mona Pizza, forming the stable Nookettear, Inc. Nook showed that he still had an interest in in-ring competition as he later participated in that night's Royal Rumble. The next show, Tom Nook issued a challenge to any tag team that wanted to take on Recette and Mona, claiming that their ambition for monetary gain would propel them to the top.

A month later, Nook would take on Conker in his first singles match. Nook displayed great improvement over his attempt back at Star Road and soundly defeated the drunken squirrel. Right after his victory, he would find out his challenge was taken up by the reforming Brave Story, Edea Lee and Curly Brace. At Killscreen IV, friendship unfortunately triumphed over capitalism and Nookettear, Inc. would lose their match.

Tom Nook would start Season 5 showing intentions of expanding Nooketteer, Inc. Recette would offer Sketch Turner a shady loan that later buried the comic book artist in debt. Nook bought Sketch's publisher, binding him to The Bank. These underhanded methods wouldn't just be left outside of the ring, though, as Nook would beat King Dedede in a match after hitting him with a steel chair while the referee was knocked out. With two wins in a row, Nook was a part of a #1 Contenders Fatal Four-Way Steel Cage match, but was unable to find success.

The next month, Nook and his newest employee Sketch would have their first match as a tag team. They defeated Papyrus & Sans in a contest that saw Sketch doing most of the heavy lifting and Nook landing the final blow. While their team ended up not being the ones to challenge for the tag titles, Nook would have bigger things in his horizon...

In a 30-man Royal Rumble, whether it was through sheer luck or cold, hard cash, Tom Nook was the match's final entrant. It did not take long until he was one of the final two wrestlers remaining, facing off against entrant #18, Sans. Despite the incredible run the seemingly lazy skeleton had put forth, he would not be able to triumph over his much fresher competitor. Big Money Nook threw Sans over the top rope and out of the ring, crowning him the winner. Tom Nook will be headed to Killscreen, and he has the EDBW Championship in his sights. 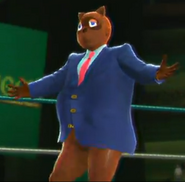 Nook once wrestled without pants.
Add a photo to this gallery
Retrieved from "https://vgcw.fandom.com/wiki/Tom_Nook?oldid=39741"
Community content is available under CC-BY-SA unless otherwise noted.