The Boss of the Saints, more commonly known as simply The Saint, was a wrestler in WVGCW and was the General Manager of the show after Bryn McMahon signed his power over to her gang and Carmen Sandiego was ousted from her position. In Season 4, she was forced to share control of WVGCW with Samus Aran, who won a share of the leadership role in a match at Breakdown 2/3. During Season 6, her control over the show was handed over to GLaDOS by Kinzie Kensington, removing her from her position as General Manager. She and Kinzie would hit the tag circuit next in Season 7 as The 3rd Street Saints, only to leave the active roster the following season to put full focus into her political career. Currently he competes in EDBW with his long time partner-in-crime, Johnny Gat.

A gangbanger of undefined race, gender and nationality. The Boss of the Saints was conscripted into the street-gang known as the 3rd Street Saints from the city of Stillwater. Eventually The Saint rose up to become the gang's boss. From there the Saints' rise to power really began, first they conquered Stillwater and became mass-media moguls in the process. Then The Saint was drawn into conflict in another city, Steelport and managed to defeat both Steelport's cartels and a heavily-armed government anti-gang taskforce. The Saint became a national hero after defeating the head of aforementioned taskforce who had gone rogue and attempted to nuke Washington. This popularity allowed the Saint to become President of the United Saints, however this position invoked the ire of an extraterrestrial warlord. But of course The Saint would, through sheer bravado, defeat the evil aliens and become ruler of the galaxy.

Season 2: NO WO MAN SHOULD HAVE ALL THAT POWER[]

After his daring escape from the police at the end of Season 1, Bryn McMahon sought refuge with the 3rd Street Saints.  In exchange for his protection, he signed over the rights of VGCW's Female Division to their boss, The Boss - Leader of the 3rd Street Saints. Bryn asked Lightning to show her the ropes before leaving forever (or until he got bored and came back.)

Soon after, The Saint learned another held the title of "The Boss." The latter said she'd been called that since the Cold War. Angry, The Saint challenged her to a fight; the right to be called "The Boss" at stake. However, The Saint just couldn't handle the original Gurl Gamer Champion's CQC onslaught, and would have to settle for being called "The Saint."

Shortly after, while on the campaign trail, Grunty and Bayonetta made their move against Terra, and when The Saint learned of this, she was pissed. With Terra injured by the blast, The Saint soon realized a new singles title was needed for the mid-carders, and The Saint announced the birth of the Casuallette Championship from atop a ladder. During that same episode, she had a Cage Match with Samus Aran in which both wrestlers simply refused to stay down and wouldn't stop inferring with the others attempts to climb. The Saint's dirty tactics and Crotch based offence still weren't enough to stop Samus, and the match was forced to be called early.

Samus was enraged after that vicious cage match, and threatened to take The Saint to court. In response, The Saint threatened to blow up the court. A typical measured response. Later on, Samus was found unconscious after an attack, and The Saint left on her campaign trail. Naturally, all suspicions pointed to her, and when she returned, Lightning attempted to ask her if she was involved. The Saint understood her job as security, but refused to offer any intel to anyone outside of her gang, or celebrity cameos. So Security Guard L joined The Saints and became Purp L, adding an incredibly powerful ally to The Saint's forces. She was also involved in a Hell-in-a-Cell fatal four way match, in which she was seen still trying to make Poison submit even after Shadow Peach had already won. The brutality of the Saints knows no boundaries.

During this time, Samus had returned and was looking to get revenge on The Saint, who she assumed was the culprit. Samus hired Franziska Von Karma to be her lawyer in a case against The Saint. However, threats of bombing can make light work of a trial, so Franziska instead demanded a match between The Saint and Samus at Breakdown 2/3. If The Saint won, the charges would be dropped. If Samus won, she would gain a portion of the control over the show. The Saint agreed to the match, and the two would fight at Breakdown.

During that same night, Carmen Sandiego returned to WVGCW, but found it far more difficult to steal a belt than it was before. But before she could be arrested, The Saint ran out to help one of her idols, and paid for bail from her own pocket, allowing Carmen to wrestle once again. The Saint and Samus then fought later in the show. However, halfway through the match, Franziska ran in to help her client take down The Saint. Soon after, a returning Lara Croft also ran into the ring and aided The Saint. The match became a Tornado Tag Team Match, in which Franziska won by pinning the intruding Lara.

The Saint was understandably furious at the outcome of the match, especially considering the contract she had signed meant that, despite never getting pinned, she still had to give control to Samus. She took part in a 2/3 falls match against Tina Armstrong in perhaps the most American of matches ever seen in WVGCW. Patriotism ran wild, and in the end it was Tina who emerged the victor, winning 2- 0. The Saint spent her time acting as half-GM, while Samus made her own decisions to try to assert herself. When Franziska was run down by a car in the parking lot, Samus accused The Saint, who denied even owning the car. Perhaps annoyed at the constant niggling by Samus and exhausted from her campaign trail, The Saint told Shaundi that she was planning on going on a cruise for a while. This was the last anyone saw of The Saint for a long time.

Suspicions about what had happened to The Saint fell onto Samus, and when Lara Croft returned from jail after being arrested at Breakdown IV, she accused Samus of doing the same to The Saint as what she'd done to her, and sunk her ship. As it turned out, Samus hadn't done that at all. The Saint, as it turned out, had decided that Samus could have the job she'd wanted so bad, and was enjoying her time away on a stolen cruise ship. Relaxed, refreshed, and in an uncharacteristicly good mood, she decided to offer her friend Kinzie Kensington a place on the roster before calling Samus to let her know she was alive and on her way back.

The Saint returned to WVGCW at the start of Season 6 in a much better mood, but kind of confused about what the giant robot was doing in the ring. Samus explained the situation to her, and that she had hired GLaDOS so the two GM's could focus more on wrestling and less on babysitting. The Saint started off in a 6-woman match to begin the new season, but was unable to make the win as Videl pinned her co-GM before she could take anyone down.

The Saint was sparsely seen for the start of the season, and eventually, Kinzie Kensington decided to act on a whim of hers. Having seen that The Saint was far happier when she didn't have to worry about managing the show, she decided to ask GLaDOS if it was possible for her and Samus to run the show themselves, relinquishing control of WVGCW in order to help keep The Saint in a good mood. GLaDOS agreed, but unbeknownst to Kinzie, she had made the same deal with Samus earlier, meaning both the co-GM's had signed over their control of the show to GLaDOS, making her the official and sole General Manager of WVGCW.

Free of all managerial duties The Saint decided it was time to re-enter the ring. She was also finally successful in coercing Kinzie to join her in the ring, and The Third Streets Saints would become an official WVGCW tag-team. The Saint carried Kinzie to a win against The Witchpac, which would be the first ever victory for either wrestler. For this victory she would be granted a spot in a unique matchup for a WVGCW Co-Op Championship #1 Contendership match. She would be pair with Princess Zelda against Kat and Maya Fey. If the Saint and Zelda won then 3rd Street and The Last Sheikah would face off for #1 Contendership. This match however did not quite go the way The Saint wanted. Zelda ate the pin and 3rd Street would need to do more in order to prove themselves.

In the debut episode of Season 6, The Saint made a shock to everyone by first being male and secondly being in EDBW after leaving WVGCW. He and Johnny Gat teamed up and made a new Third Street Saints. They faced Team Bean Machine after they were locked out of the EDBW for the ending of Season 5. They faced a hard battle but after a Tag Move, they were able to seal the deal on Grounder.

During the credits scene that showed Random Thing Picker was going to be back, The Saint was listed under the giant wall of women for the Random Tag Team 2 event. Saint was not picked for this event so we still have no clue why he was there.

Saint would see his next match in the United States President Elect match vs Max, the current president at the time. The match went back and forth until a censored groin shot to Max happened and Saint was able to get the pin, becoming President. After becoming president, Saint and Gat went on to face Tenacious V for the Co-op Contendership. Following in the footsteps of Max by becoming a president and getting the Co-op belts, they won the match after Gat hit a dive kick on Viewtiful Joe. 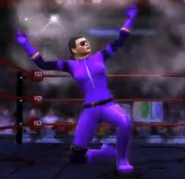 The Saint's The Boss Halloween outfit

You look different Boss, you change your hair?
Community content is available under CC-BY-SA unless otherwise noted.
Advertisement