Start a Wiki
"E-everyone deserves peace...happiness...w-why do some always want to take that from me...? I-I hope some of [you] truly, truly understand..."

The announcer's table is used by Jerry Lawler, Michael Cole, JBL, and other WWE commentators to observe matches. Sometimes, the table's covers and monitors are dismantled from it, allowing other wrestlers to use the table as a weapon.

Table-san is a college student in need of money in order to put herself through medical school and support her younger brothers, Table-kun, Table-kun 2, and Table-kun 3, after her parents passed away. However, to do this, she must submit herself to vile acts on a regular basis, such as being forced to remove her top, and worse. In spite of her profession, she's actually very shy and modest, and would rather be doing something more respectable, like working as a Wal-Mart greeter.

Sometimes, when she's doing her job in the middle of a match, people in the audience will yell degrading things at her, telling her to cover herself and be modest, and calling her names like 'slut' and 'whore'. Those comments hurt her. The only thing keeping her going is her love for her brother, Table-kun, but she hardly ever gets to see him since she's busy working and studying, and he's off playing with his friends Hammer-kun and Cane-kun underneath Ring-senpai. Sometimes he doesn't come home until very late, which makes Table-san worry very much. The stress isn't good for her, especially with her rigorous studies. Sometimes she wonders if it's even worth going on anymore.

Thanks to a wealthy benefactor, Table-san got a new dress. She appears to like it, as it covers her up a lot more. Perhaps she has not lost hope?

Recently, Table-san was forced to watch a match in which an infinite supply of Table-kuns were destroyed and set on fire, before being defiled by Locke Cole and the AVGN dancing on top of her nude form and destroying her while the announcers called her disgusting. She underwent intensive therapy to heal the heavy mental, emotional, and physical trauma inflicted by the nightmarish event. Afterwards, she was forced to watch as Donkey Kong and Zangief slaughtered countless Table-kuns in front of her, and right back into therapy she went.

Her therapist advised her to share her feelings with others rather than keep them bottled up inside her, so Table-san created a Twitter account. She gained over 200 followers the first day. Most of them are creeps.

Gruntilda Winkybunion has been the only competitor thus far to address Table-san, chatting with her prior to the 2013-04-12 show, as well as constant harassment on Twitter, and at times seemingly showing concern for her, though that didn't stop her from putting Jessie through Table-San on that very night - not even Table-san's closest confidant in the VGCW cares that much for her well-being.

In the start of the sixth season of VGCW, poor Table-san prepared her body to endure what would be another nightmarish season's worth of stripped pride, shattered psyches, and even broken legs. And yet, despite many close calls where certain wrestlers got a little too close for comfort, she has gone the first couple of episodes of season six without 'being lewd' or getting broken through.

This wouldn't last forever though, as the AVGN, on the second night of VGCW, put Red through her shamelessly.  Perhaps his nerd rage had reached it's limit?  Regardless, Red gained the dubious honor of being the first man to break her honor (and body) in the 2Kuality era.

And though some wrestlers choose to manhandle Table-kun for Extreme Rules matches, and always the fear that they'll take their anger and violent methods on her, she seems to have gained a sense of optimism.

After all, when 'Tonight is the Night' that she can go home without being touched once, a lady can breathe easily.

On January 17th, it was revealed that there are actually three Table-kuns, thus inferring that either Table-san has spent her money on a cloning machine, or there are triplets. Recent witness reports say Table-san has a Spanish cousin (Señor Mesa) working for another small-time promotion, though not as strong as Table-san. 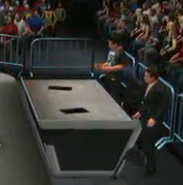 T-table-san is topless? Has she no shame? 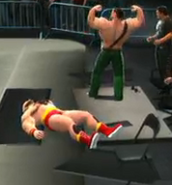 Table-san falls in the line of duty once again.

Table-kun in the hands of strange men.

CM Punk was a friend of the Table clan, here fixing the sombrero of Sr. Mesa from Spain. 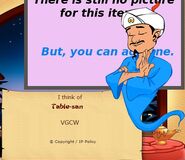 Ok guys, seriously? All I wanted to do was play some Akinator, and then this.

She's back. In card form

And action figure form too

Add a photo to this gallery
Retrieved from "https://vgcw.fandom.com/wiki/Table-san?oldid=40471"
Community content is available under CC-BY-SA unless otherwise noted.