Video Game Championship Wrestling Wiki
Register
Don't have an account?
Sign In
Advertisement
in: Other (Character Type), Off Roster, Face,
and 2 more

"Today, I am judge, jury, and executioner."

An intelligent lawyer, Jennifer Walters is the cousin of Bruce Banner. One day she was seriously wounded and needed an emergency blood transfusion, which she received from Bruce. The blood transfusion caused Hulk-like symptoms, resulting in a more controlled version of the Hulk to appear (she can control when she becomes She-Hulk, and isn't as violent as the Hulk.) She-Hulk has been a prominent member of many teams in the Marvel universe, including the Avengers and the Fantastic Four. Not known just for her gamma strength; She-Hulk is also renowned for her ability as a lawyer, seen throughout offering legal services to many Superheroes and the occasional villain. She-Hulk also carries the distinction of having one of the longest solo-running female comic book series in Marvel.

With the new Women's Tag Team division starting to bloom, She Hulk decided to team up with another character who appeared in Marvel vs Capcom 3, Morrigan, resulting in the new tag team Devil's Advocate to go against the also newly formed tag team, Chozo Raiders. When Jenny was first tagged into the ring, she wowed the fans with her impressive power, which included performing a vertical stall suplex on Lara Croft. She also sent poor Lara though Table-san by leaping off the top turnbuckle. She Hulk and Morrigan built three meters several times as She Hulk hit Samus with two Sunday Drivers, picking up the win.

She Hulk was then tested in the world of Singles competition against WVGCW's biggest American, Tina Armstrong. Tina wouldn't let the size difference be a factor as she landed as many attacks as she could. Hitting She Hulk with the Texas Oil Driver, Tina thought the match was hers, but She-Hulk hut back, landing Sunday Driver after Sunday Driver and managing to score the win. She and Morrigan took on Still Alive after this in a long and brutal brawl, but the heart of Faith was too much for the duo and She-Hulk took the pin to suffer her first loss.

She-Hulk then took part in a 6-woman Elimination match, and again proved her raw power by reaching the final two. However, she went up against her fellow mastodon Ayla, and despite her strong showing during the match, she couldn't stand up to the cavewoman and fell just short of victory. Due to this close fight, the giant pair decided to settle the score at Breakdown 2 in a regular match. The ring was in very real danger throughout their battle, but in the end, She-Hulk was forced to accept Ayla as the strongest woman, and tapped out to the Tyrano Rack. Gracious in defeat, she raised Ayla's hand to the audience in a show of respect.

Season 3: The Sunday Driver has no brakes.[]

She-Hulk started her season strong with a victory over Roll Caskett via roll-up, proving both that her loss to Ayla wasn't slowing her down, and that even lawyers aren't above ending matches by roll-ups. She then faced off against Cammy in a Last-Woman Standing match. The size difference didn't stop Cammy from unleashing everything she had, but in the end she wasn't able to overcome She-Hulk's sturdiness, and she was counted out after a powerful scoop slam. Two victories over well liked wrestlers left the audience wanting to see She-Hulk take a fall, and to their surprise, they got their wish during a tag team match against 18 Volts, when Lightning unleashed the powerful Hallway to Hell and kept She-Hulk down for the three count.

Many assumed when the two were put into a singles match later that Lightning wouldn't be able to strike twice, but to everyone's amazement, Lightning proved her own strength and easily took down the formidable attorney in less than 10 minutes. She-Hulk decided she needed to remind the crowd of her own strength after this loss, and dressing classy in her Halloween suit, she took on fellow lawyer Franziska Von Karma. The defence ran rings around the prosecution, and the case was closed at 2-0 to She-Hulk. Her last appearance was another tag team against the newly debutted Wright Anything Agency, and once again the crowd saw She-Hulk's resilience come into play, surviving all of WAA's attempts to put her down, before finally scoring the victory in a close and bloody match.

Wearing a new outfit, Tifa was hoping to make a new for herself by taking down one of WVGCW's biggest monsters. However, she had underestimated the green tornado, and the crowd winced as She-Hulk took Tifa down easily to start her season off as strong as ever. She then continued her tag teaming with Morrigan in a Steel-Cage Match. She-Hulk was able to escape first, and the crowd began to react, before both they and She-Hulk realised the match didn't end until BOTH wrestlers escaped. Stuck alone with two wrestlers, Morrigan was battered and beaten, before both members of Saints Roll were able to escape to the jeers and boos of the crowd.

Once again, another wrestler assumed She-Hulk was an easy path to getting a title shot. Once again, the lean, green wrestling machine was underestimated. Sindel tried to take She-Hulk down and earn a title shot, but couldn't stand up to her, and like many before her, she was pinned by the Sunday Driver for the 3 count. She tried to carry the momentum on in the tag team scene against Jet Set Radio, but to her surprise, Morrigan never showed up, being too engrossed in her Casualette Title shot to care about She-Hulk. Jennifer tried to take on the pair by herself, but stood little chance, and she was defeated, ending her chance of being in the Co-op Tag Team Tournament, and ending the tag team Devil's Advocate.

She-Hulk would have the chance to take her frustrations out on Cate Archer, yet ANOTHER up-and-comer looking to earn a chance at the title by taking down She-Hulk. Perhaps her overconfidence was too much though. Cate crushed She-Hulk, and left her confused and beaten in the ring. A surprisingly brutal loss for She-Hulk that rocketed Cate towards the title scene.

Season 6: The defence rests...her fist upon your face.[]

She-Hulk returned at the start of Season 6 in a 6-woman First Fall match. She spent the match battering the Other GM Samus, even using her to break down the walls of the cage. In the end, Videl would take over fighting Samus and pinned her for the win. She-Hulk then had the chance for revenge she'd been hoping for in a match her old partner, Morrigan. The pair were evenly matched, and the crowd saw She-Hulk put on a show they had rarely seen from her. In the end, Jenny made Morrigan pay for her selfishness the only one she knew how; by planting her on the ring with the Sunday Driver and knocking her out cold.

She-Hulk wouldn't be seen for a few months, but she emerged once again to fight Miss MITB herself, Rydia. Like many who had gone up against Shulk, Rydia was looking to prove she was ready for whatever championship she cashed in on. In a 2/3 falls match, Rydia surprised the crowd with her skills, keeping up with She-Hulk expertly, even managing to get the first fall to make it 1-0. She-Hulk caught up fast and made it 1-1 with the Sunday Driver, but by then Rydia was able to hang on and finish the fight with the Mist Dragon Suplex, earning a surprise win against the Green Giant.

Man, these WVGCW sections have never been maintained very well. Anyway, She-Hulk was defeated by Joanna Dark, a win that added credibility to the agent who was newly debuting at the time and helped the Future Four stable establish itself. Some time after this, She-Hulk amicably retired from the company, signing her release papers in then-GM Lightning's office. 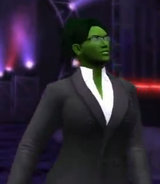