Start a Wiki
My past is not a memory. It's a force at my back. It pushes and steers. I may not always like where it leads me, but like any story, the past needs resolution.

Samus Aran is the protagonist of the Metroid franchise, and a wrestler in WVGCW. As of Breakdown 2/3, she is currently the Co-GM of the Female Division. She, along with her lawyer, Franziska Von Karma, form the team Space Court.

Samus Aran was the sole survivor of an attack on her colony by a group of alien space pirates led by a purple space dragon named Ridley. She was then raised by different aliens called Chozo: an extremely advanced, extremely extinct group of birdface people who infused Samus with their DNA. Miraculously, this had no adverse effect on her. They also gave her the imaginatively-named Power Suit, which can be upgraded to do all kinds of crazy things.

After serving the morally-questionable Galactic Federation for a while, she used the her Power Suit to become a successful bounty hunter. Since then, she's had to fight Ridley and the Space Pirates numerous times, usually over a dangerous species of parasitic jellyfish things called Metroids. Eventually, the Metroids became extinct, and the Space Pirates had been weakened considerably. But the Galactic Federation found this to be boring, and decided to start cloning metroids to use as weapons.

After an incredibly stupid incident on the BOTTLE SHIP which resulted in the unnecessary death of all but one of Samus's former squadmates, Samus got infected by a thing called an X Parasite, and had to be infused with Metroid DNA which allowed her to ate X Parasites. Samus then killed all the parasites, including the one that had possessed her Power Suit, which she ate and was cured of all her X Parasite-related problems. Now being a cross between three extremely dangerous species and possessing an absurdly large arsenal, Samus is officially considered to be The Most Dangerous Thing In The Universe™ by the Galactic Federation.

Despite supposedly being capable of single-handedly conquering the universe if she so desired, Samus gave an abysmal showing in her first two matches. She was the first woman in VGCW to be pinned when Princess Peach defeated her in the women's division's debut. The next fight went even worse: she was the first person to be eliminated in the 6-woman battle royale. For a time, she was considered the closest thing to a jobber in the women's division, though this was by an increasingly small margin. Eventually she was overtaken by Tifa Lockhart, who in turn was overtaken by Gruntilda Winkybunion (who suffered her fourth loss at the hands of Samus herself).

Some speculate that the cause of her poor performance is Commander Adam Malkovitch, who has a reputation for not authorizing things when they're needed. Supporters of this theory believe that Malkovitch didn't authorize winning, either because he forgot to or because he just didn't want Samus to win. However, there's no real evidence that Malkovitch is even involved with VGCW, and it's entirely possible Samus may perform better with time.

...And that she did. Samus managed to pick up her first win in a triple threat match on the Season 2 finale pre-show to prove that she's not totally past her prime yet. Nevertheless, debates over the possibility of Adam's involvement have continued, some arguing that this time he didn't authorize losing.

Samus' first appearance in Season 1 was a HIAC match against Android 18. Rumors of Adam's involvement with (W)VGCW were still alive and well, and they weren't doing anything good for her reputation. In spite of this, she maintained a modest lead throughout the match and claimed victory, once again surpassing expectations. What she didn't know was that she didn't actually fight Android 18, she fought an impostor.

The Bounty Hunter participated in the Gurl Gamer Championship #1 contenders tournament, her opponent being Team Rocket's own Jessie. Samus was not authorized to win the match, as she was at Jessie's mercy throughout its entirety, losing when a superplex attempt got reversed by the Team Rocket member.

Samus saw some action again in a Fatal Fourway on May 19th against Chun Li, Gruntilda Winkybunion, and Roll Caskett. Samus started off strong against Chun Li, but when she rolled Li up for the pin that ended up triggering an inner monologue which gave Li time to reverse and knock Samus out early in the match. Samus continued her inner monologue as she walked all the way back to the locker room.

After a rather upsetting Season, Samus kicked off Season 2 against the summoner, Rydia in a 2/3 Falls match. Sporting a new Zero Suit and a brand new moveset, Samus shut off Adam's authorization to Job and completed her mission for once without any assistance by making the Summoner tap with the Tourian Gate twice and kicking off Season 3 with a great start.

After her first singles win of the Season, Samus teamed with Lara Croft to enter the Tag Team title scene. Their first match was not an easy one as it was against Devil's Advocate. As the match kicked off, it was noted that this newly formed team was to not be messed with as She-Hulk went on to put a beating on both Samus and Lara for the majority of the match. Although Samus looked impressive and pulled as much weight as she could, she couldn't secure the win for the Chozo Raiders and she was soon to be out of the Tag Team title scene for the time being. Would this loss also translate into Samus losing in Singles competition?

The answer to that would be put to question as Samus faced newly formed Shadow Peach in a Last Woman Standing Match. As the match kicked off, Peach would show why she was able to carry Daisy in their Tag match as she put on a clinic against the Hunter. Although Samus gained offense, she couldn't do much for the first half. After an embarrassing Irish whip loop, Samus found herself speared on the barricade. One would think that a Spear would take someone out for the count......not for Samus as she had enough energy to make a comeback and land a Piledriver to secure the 10 Count. With this win, Samus makes it known that Season 3 is her time. Can Samus make it 3 in a row and make her name known enough to get a Gurl Gamer Championship match?

Unfortunately, no. Her next opponent was the on-fire Ayla, ending up another victim on the future Gurl Gamer Champion's list. This would lead to her losing to Elizabeth in a classic, and then being fed to Mama.

Samus got out of her funk by beating Tina Armstrong in a Bryn Special during the Halloween episode, in which she was dressed up in her Justin Bailey costume. On December 5th, Samus learned from Lightning that Lara had been in a ship accident and presumed dead, but this seemed to make Samus happy rather than sad that her tag team partner was gone, what could have caused this reaction?

On December 27th, Samus fought The Saint in a cage match, but the GM hit her in the groin again and again, pissing Samus off. The Bounty Hunter threatened to take the GM to Space Court, but later Samus was found unconsious in the parking lot and had to be rushed to the hospital. After recovering, with the help of Franziska Von Karma, she came to an agreement with The Saint that if she could beat her in a Final Destination match that she would drop the charges, but if Samus won she would get the booking powers, just like a GM.

So at Breakdown 2/3, Samus and The Saint had their match. After a wild fracas, where von Karma and Lara Croft, Samus's former partner who'd gone missing (and who people believed Samus had a hand in her disappearance) both showing up, Von Karma pinned Lara, and thanks to the lawyer's savvy, counted as a win for Samus.

With the help of Von Karma, Samus was now in a position of power in WVGCW. No longer did she have to take authroization, but she was now the one that gives the authourization. As her first act as Other GM, she booked a match between her former partner Lara and Ex-GM Carmen Sandiego. In retaliation, The Saint refused to book her for the Anniversary Show, an act which seemed to hit a nerve in Samus. In an attempt to one-up her fellow GM, she contacted Bayonetta & Sindel of the New Witch Order to put on an entertaining match (which didn't happen, the match ended rather quickly & abruptly). Later that evening, Franziska was struck by a car, leaving her hospitalized, an act which Samus immediately pinpointed to The Saint and her gang, who denied all involvement in the incident.

Sick of not being booked by her colleague, she booked herself to fight Daisy, but not before meeting with a recently-discharged Von Karma, who gave her take on her supposed assassin. Shortly after the match began however, Daisy's Partner arrived to spectate the match from ringside. Shortly after she arrived however, Samus landed a Metroid Fusion on Daisy, knocking her out and picking up the win. Later that evening, The Saint once again tried to upstage her by announcing a Ms. Money in the Bank match. 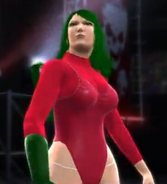 Samus' Halloween alternate outfit (2014)
Add a photo to this gallery
Retrieved from "https://vgcw.fandom.com/wiki/Samus_Aran?oldid=38634"
Community content is available under CC-BY-SA unless otherwise noted.