Start a Wiki
Whatever.

Rinoa Heartilly is a playable character in Final Fantasy VIII, and a wrestler in WVGCW. She was regarded as the Female Division's ultimate jobber, having only won her debut match and another match at Breakdown. She lost her place as WVGCW'S Ultimate Jobber as Ulala took that crown. Since joining Team Rocket, Rinoa has found more success in singles and is now part of the tag team Team Rockette with Jessie.

Rinoa Heartilly is the core love interest in Final Fantasy VIII. The plot dictated that Rinoa be the game's rebellious female and hired the mercenary group SeeD to help her rebel group, the Forrest Owls, free their country of Timber by getting rid of the Galbadian Army. Their plan also involved some odd kidnapping attempt on Vinzer Deling, the president of Galbadia. One would wonder why they just didn't act as good little terrorists or freedom fighters or whatever you want to call them and blow up the train containing the president, maybe it was the wording of the contract? Anyway, the plan ends up failing as the president they kidnap is a zombie body double. Rinoa, probably because she thought Squall was cute in some rebellious way like she is, decided to stick around with him for the remainder of the plot. The rest of the game features Rinoa arguing with her dad (a General in the Galbadian army, how convenient), trying to get with Squall, falling into a coma, becoming a SUPER DANGEROUS SORCERESS, traveling though time, and fainting many, many times.

Rinoa grew tired of Final Fantasy fans saying she was "the WORST female heroine in Final Fantasy," and decided WVGCW would be the best way to end this nonsense. Her first appearance was on the 2013-01-17 show as part of the "Viewer's Choice" Gurl Gamer Division pre-show. She faced off against fellow Final Fantasy heroine Rydia, and easily forced her to submit with the "Ri-NO" Lock. Rinoa had a chance at success after that, and competed in a six woman Hell in a Cell match for the Gurl Gamer Championship, facing off against Cammy, Sheik, The Boss, Sindel, and Gruntilda Winkybunion. She did not end up victorious and the WVGCW began its long hiatus.

When the hiatus ended, Rinoa continued her losing ways. She would be involved in the Battle Royale for the #1 Contender spot in the 2013-04-06 broadcast. Her appearance changed for the better, but her entrance music and overall in ring performance was enough to put the fans asleep (and probably earned her heel status as well). She was the first to be eliminated at the hands of Poison.

In her next appearance, Rinoa was placed in a Hell in a Cell match against Tifa. Rinoa, with new entrance music in tow, thought this would be her big chance to prove she was not the worst heroine in Final Fantasy by taking down one of the more popular (for various reasons) females in Final Fantasy. Rinoa's performance in ring was slightly more exciting than her previous outing, going so far as to put the member of AVALANCHE through the cell wall. However that would not even be enough to stop Tifa as she was able to lay out the unpopular heroine with a Dolphin Kick. Rinoa would need to make her in ring performances more exciting if she hoped to prove she's not the worst Final Fantasy heroine.

Rinoa was involved in an Extreme Rules Match on 2013-05-13 against Artificial 18. The match was going on as normal, but midway through Android 18 came down and attacked both the impostor and Rinoa, causing a triple threat match to occur. However, during that match, Artificial 18 hit the real Android 18 and left the ring, and the match went back to a singles match between Android 18 and Rinoa. Subsequently, Android 18 delivered vicious beatdown on Rinoa, as she got beaten with Singapore canes, crutches, and a ladder. She even had soda thrown in her face when she tried to use the ladder, and got sent through Barricade-kun. Rinoa could not overcome the assault and earned another loss in one of the more bizarre series of events thus far in WVGCW.

She would make another attempt to win a match during the Season 1 Finale against Kitana in a 2/3 Falls match. But, despite showing off some rather impressive high-flying moves, she would once again fall just short of a victory, losing 2-1 to the Edenian Princess.

Following the beginning of Season 2, Rinoa would not be seen for weeks. And when she was eventually called out to the ring on August 1st , she would blow the minds of everyone in the crowd, perhaps for all the wrong reasons, by sporting the attire of her love interest Squall Leonhart against the recently arrived Jade. In a match that seemingly had no end in sight, Jade would be the one who took the win, leaving Rinoa once again empty-handed.

When the Female Division returned after a short hiatus on August 22nd, Rinoa would open the show by being placed in a 2/3 Falls match against the only other person with a claim to the title of the Ultimate Jobber; Gruntilda. With the crowd firmly on the Green-Skinned witch, Rinoa would nonetheless fight tooth and nail for a victory. What this resulted in, however, was that she ended up being put through Table-San, and having a taste of Grunty's Witches Brew finisher four times over. Needless to say, she lost, yet again, for the seventh time in a row.

But these losses didn't seem to affect Rinoa, who shook them off with a simple "Whatever." At WVGCW Breakdown, Rinoa met Jessie in the ring in a match to see who truly was the worst. After a brutal fight, one highlight of which being James standing above an invisible Table-san, Rinoa won in the only way possible; reversing a roll-up pin in an extremely anticlimactic finish. For the first time in over eight months, Rinoa won a match. Although, she still doesn't seem to care.

Rinoa would start Season 3 with her first win in a long time. This success was enough to catch the eye of James, who had just broken up his partnership with Jessie. It's unsure how James convinced Rinoa to go along with this, but she probably wouldn't be bothered either way. Rinoa would come out to fight Jill Valentine with James at the ringside, gaining her third ever win. Jessie and James would argue over Jessie's recent losses, and they would make a wager to take place at Breakdown 3. If Jessie beat Rinoa, she would take control of Team Rocket. If Rinoa won, Jessie would rejoin Team Rocket. The two fought for a third time, and once again, Rinoa would pull ahead and take the win. Rinoa now had a new team mate. She didn't really care.

Rinoa's winning streak would come to an end at the start of Season 4 with a loss to Chie's team mate, Elizabeth. She would gain a win back against Videl soon though. Though she didn't appear for quite some time after this win, her recent victories were enough to give her a spot in the 6-woman Casualette Contenders match at Breakdown IV. However, she lost interest in the fight pretty quickly and was eliminated by Jade second.

Rinoa would lose her first match of the season once again, but after that it was decided by James and Jessie that it was time to branch out into tag teams. Despite the two not being considered the strongest wrestlers, they were able to win their debut against Saints Roll, qualifying themselves for the Co-op Contenders Tournament. However, they were eliminated in the first round by the eventual winners RPGenie. Rinoa would go back into singles matches, with Jessie managing her instead of James. However, it proved to be pretty unnecessary. She fought against Zelda in a long, but one-sided match that gave Rinoa her second ever victory via her custom finisher. She then appeared at Breakdown F.I.V.E, in her fourth Breakdown in a row, in a WWE vs WVGCW fight against Natalya Neidhart in a squash match where Jessie didn't even need to lift a finger this time. With these powerful wins, people had begun to notice Rinoa again. Who knows where these victories could lead Rinoa. The only thing we know is she isn't really bothered. 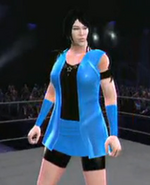 Add a photo to this gallery
Retrieved from "https://vgcw.fandom.com/wiki/Rinoa_Heartilly?oldid=38608"
Community content is available under CC-BY-SA unless otherwise noted.