The Ringside Reporter is WVGCW's professional interviewer and hails from Nintendo's Rhythm Heaven series. Unlike the interviewers in the other divisions, she is not a current or former wrestler.

In the Rhythm Heaven series[]

The Reporter is from the Wii game Rhythm Heaven Fever. The level she is featured in, Ringside, has her interviewing a masked wrestler after his big match. She also appears in the 3DS Rhythm Heaven game, sporting a new outfit.

The Ringside Reporter continues her wrestler interviewing duties in WVGCW, making her first appearance on April 12th, 2013. She has done many interviews since then, such as asking Poison about her feelings on the tournament finalists, Princess Daisy and Terra Branford on the June 6th, 2013 show. In the June 20th, 2013 stream, she interviewed Bryn McMahon about the big Title VS. Title match that night and the contract he signed with Carmen Sandiego. While hard-working, she has occasionally grown impatient with some of the wrestlers' quirks or inability to speak.

So far, she has shown no interest in trying her luck in the ring. 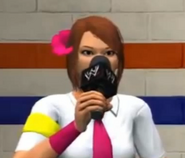 The Ringside Reporter is sometimes shy.
Community content is available under CC-BY-SA unless otherwise noted.
Advertisement