Reyn is a party member in the Wii JRPG Xenoblade Chronicles, and a wrestler in VGCW. He is a graduate of EDBW, where he is a former EDBW Champion.

Man, what a bunch of Jokers!

Reyn was born in Colony 9 on the Bionis, and is the childhood friend of Shulk and Fiora; determined to protect both them and those he cares about, he is a member of the Colony's Defence Force, until one day when a large group of Mechon overwhelm the colony and their leader, a heartless faced Mechon dubbed "Metal Face", kills Fiora trying to protect them. Engulfed in sorrow over his childhood friend's death, Shulk vows to destroy the Mechon once and for all by using the Monado, and Reyn tags along to ensure his safety. Over the course of their adventure they encounter many Homs, Nopon and High Entia alike, and makes valuable friendships along the way while meeting others determined to put a stop to the fighting.

Reyn serves as the muscle of the group, looking out for his friends while sometimes getting them into even deeper trouble thanks to his lack of smarts in comparison to the rest of the group, often serving as the comedy relief along with Riki the Legendary Heropon. Despite this, he cares heavily about the rest of the group, and is willing to put himself in danger to ensure their safety.

Season 11: You Will Know His Name Edit

After a long stay in the developmental, Reyn finally made his way to the main roster! He debuted to a crowd of fans cheering him on as he beat up what appeared to be a homeless man who had wandered into the ring. With an incredible kickout from the Zubaz's Divekick, Reyn struck back with the Alley-Oop to win the match. Fans continued to chant "REYN TIME!" in a show of love for both Reyn's debut and violence against the possibly homeless.

Reyn would have a chance to properly test his strength with his next match, which would put him against five other competitors. Reyn would avenge having his pinfalls stolen by ultimately being the last man standing, pinning Raijin for the win. 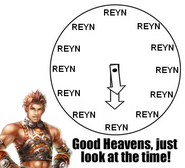 Reyn showing off some official VGCW Merchandise.
Add a photo to this gallery
Retrieved from "https://vgcw.fandom.com/wiki/Reyn?oldid=38195"
Community content is available under CC-BY-SA unless otherwise noted.