Raphael is one of the four protagonists of the Teenage Mutant Ninja Turtles franchise and a former wrestler in VGCW. He is a former VGCW Champion and the only champion to successfully defend the title during a time when it was thought to be cursed. During his time as champion Raphael became a member of The McMahon Elite Four and briefly became the group's de facto leader before it dissolved. He competed in a tag team, The Elite Two, with another former member of the Four, Ezio Auditore, until Raphael left the company.

Raphale Raphael is one of four main characters in Teenage Mutant Ninja Turtles. He is known for his signature sai and red bandana, which he kept wearing after the other turtles decided to change theirs into different colors. However, it seems that Red Leonardo Raphael is still mistaken for the other three turtles. Raphael is said to be the most hot-tempered, rebellious turtle out of the four, which explains his constantly angry-looking face that rivals Kratos (who for a long time was the only wrestler more hated than him). He's also a ninja turtle.

Raphael had a fast and harrowing rise to fame and infamy from the very start of his VGCW career. He debuted on December 12th, 2012, facing fellow ninja Shredder Yellow Sub-Zero Scorpion and defeating him, making him one of a handful of rookies to actually win their debut match. Raphael then won the December 23 Royal Rumble to earn a VGCW Championship match against Solid Snake.

Raphael opened up 2013 and Season 2 in a big way, pinning Snake to become the new VGCW Champion less than a month after his debut.

Many expected Raphael would drop the title immediately, as the Gerudo Curse had caused all of the previous champions since Ganondorf's reign to drop their belt during their first title defense. However, when Dr. Eggman challenged Raphael on January 6th, Raphael proved more than up to the task, crushing the Master Plan with multiple powerbombs and defeating the doctor in less than six minutes to retain the title. Eggman would become the #1 contender again after winning a King of the Ring tournament, and earn a rematch against Raphael on January 16th. The match would not go as smoothly for Raph as their first, but he would still win decisively, spearing Eggman through the barricade and leaving the genius lying unconscious outside the ring to win the match by countout. Some of Raphael's fans began to refer to his unexpectedly long reign as the "Thousand Years of Pizza", a reference to the Thousand Years of Darkness that Ganondorf had held the championship.

Heel in a Half ShellEdit

To the shock and outrage of the crowd, Raphael would ally himself with Baz McMahon on January 17th, becoming the leader of The McMahon Elite Four. Raphael worked in tandem with the other Elite Four members to oppose Ghost Trick's investigation, and in the process became the most despised heel in the company, drawing deafening boos whenever he appeared. Despite the new hatred the audience felt for him, Raphael remained one of the strongest competitors in VGCW. He defeated Dan Hibiki to win his third title defense, and on January 22nd nearly defeated all of Ghost Trick's team by himself after Ezio Auditore and Gary Oak were the first two eliminated from the three-on-three elimination match. Despite being outnumbered three to one, Raphael was able to singlehandedly defeat Phoenix Wright and Solid Snake before finally being brought down by Nappa after his stamina had been exhausted.

Before the three-on-three match, McMahon had been arrested, leaving nobody to give the hypnotized Mr. L orders and prompting him to go berserk, indiscriminately attacking everyone he came across. Eventually Raphael fell victim to Mr. L's rampage when he came out just as Raphael was set to defend his championship against Ganondorf. After Raph and Ganon's respective allies Ezio and Zangief beat down Mr. L and drove him away, the attack proved to be a blessing in disguise for the champion turtle, who refused to fight with Ganondorf until he had recovered from the attack. However, there was no stopping Ganon from getting his title chance the next show, and in one of the most highly anticipated matches in VGCW history, Raphael lost his title and the 1000 Years of Pizza came to an end. Raphael's VGCW Championship reign ended after three successful defenses - one short of the record set by Ganondorf - and thirty-one days - a VGCW record.

The McMahon Elite Four crumbled shortly before Raphael's title loss, as McMahon was imprisoned, Mr. L had gone rogue, and Gary abandoned the group. However, Raphael had one more remaining ally in Ezio, whom he went into tag team competition with, christening their new duo The Elite Two. They made their debut as a tag team on 2013-02-22 against Wario Ware Inc. Surprisingly, Wario managed to subdue the former champion, but the Wario bros were disqualified at the last moment for Waluigi being in the ring too long. Strangely, Ezio had also been in the ring when the call was made. In addition, another controversial match had occurred earlier that night. This caused many fans to speculate that the referee had been paid off. Things looked even more suspicious on 2013-02-28, when their title match against Gerudo Skies ended in a similar DQ victory. While it didn't get them the belt, speculation abounded that the referee had decided to step in when things looked hopeless for the Elite Two and save them the humiliation of a clean loss. Also notably, Raphael looked particularly weak in the fight; Ezio carried him through the entire match, and Raph's brief time in the ring was a colossal step down from the normally merciless beatings he gave during the Thousand Years of Pizza. He even nearly lost the match by getting pinned, despite being significantly less hurt than Ezio. Interestingly, Ezio's performance was extraordinary, and in that night's Royal Rumble the assassin eliminated two of his former stable-mates, one of them being Raph himself. Questions abounded regarding the shady officiating during Thomas McRef's tenure, especially about whether backroom deals were made with the Elite Two or not, but unfortunately, his death at the hands of Gabe Newell means we may never know.

Raphael appeared in a non-tag team match for just the second time since losing the VGCW Championship during the Season 4 opener when he participated in the Royal Rumble. Later that night, after confronting Dracula, Gabe Newell and Adam Jensen were told they would participate in a tag team match to let them blow off some of their pent-up aggression. The unorthodox duo were pitted in a match against the Elite Two, and Raphael looked to be back in top form for the match. He seemed to be an even match for Gabe's strength, but when Ezio was tagged in, things took a turn for the worse for the Elite Two. Jensen tackled Raphael to the outside while Gabe locked in his Wallet Squeeze on Ezio, and while Raphael managed to gain the advantage over Jensen as they brawled, he was unable to assist Ezio, who tapped out.

On the 2013-04-26 show, the Elite Two faced off against the Game Grumps, the only team more reviled than themselves, in a match to determine who would take on Game Center FU in a Co-Op Championship #1 contenders match.  Fans who wouldn't normally cheer for Raph found themselves consuming pizza and cheering on the former corporate heel, giving both Raph and Ezio a much-needed boost in popularity over the Grumps. The Grumps put up an unexpectedly good fight, but eventually Raphael would earn his team the victory by Shellshocking the opposition. The Elite Two also had a long, hard-fought battle with GameCenter FU, but were less fortunate this time. Eventually the Angry Video Game Nerd would get the pin over Ezio, preventing he and Raphael from getting a second shot at Gerudo Skies.

Despite his phenomenal record in singles competition, Raphael had mostly been relegated to tag-team matches. However, on May 29th, that would change. For the first time in almost four months, Raph would get his chance and open the show against none other than his first ever opponent, Scorpion. Raphael clearly showed some rust from his lack of singles practice, and Scorpion dominated him through much of the match with his high-flying moves. However, Raph would not be denied, and suplexed and STO'd Scorp to submission, despite being the first to bleed.

Raphael continued to make occasional appearances over the next several months, but his win against Scorpion would be his last. He and Ezio would face off against Shadaloo in their first match as a team, losing the match after Bison pinned Ezio. Raphael would then go on to face Mr. Satan in his first singles match since Scorpion, but shockingly, Satan picked up the win, becoming the second man to ever beat the formerly Undefeatable Turtle in singles competition. With this loss, the cracks in Raphael's legacy were starting to show, as viewers began to look over his victories, which appeared far less impressive in retrospect. After one last tag-team match alongside Ezio, in which he was pinned by the Casual Champion Segata Sanshiro, it was clear that Raphael's time in VGCW was nearing its end and The Elite Two would be no more. As Raphael hung his boots up for the final time in VGCW, he encouraged his partner, Ezio]], to keep on trying to get a Title because he believed in him......and Pizza.

Raphael was finally officially released on November 12th. Though his career never again reached the heights of the 1000 Years of Pizza, Raph is still remembered as one of the longest-reigning VGCW champions ever, a wrestler never intended to be a contender who reached out and carved himself a place in VGCW history through sheer force of will and THQuality.

Since his release, Raphael has reportedly moved back to New York to spend more time with his family. 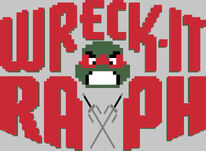 1000 Years of Pizza comes to an end
Add a photo to this gallery
Retrieved from "https://vgcw.fandom.com/wiki/Raphael?oldid=40638"
Community content is available under CC-BY-SA unless otherwise noted.