Dear Mario, Please come to the castle, I baked a cake for you. Yours Truly, Princess Toadstool (Peach).

Princess 'Toadstool' Peach is a recurring character in the Super Mario franchise, and a wrestler in WVGCW. Debuting in the Pre-Season in her classic look, she was forced into her 'Shadow Queen' Persona on July 23rd 2013. It took some time for her power to be fully realised, but when it did, she pulled off a series of upsets to become Casualette Champion. She and fellow franchise monarch Princess Daisy form the tag-team Double Dash!!

In the Super Mario Franchise[]

Princess Peach is the monarch of the Mushroom Kingdom. We can only hope its a constitutional monarchy, as at no point in her life has she displayed any sort of competence whatsoever. Perhaps this is why none of the toads that work for her make any attempt to keep Bowser - or anyone else for that matter - from kidnapping her. Fortunately for her, Mario andLuigi are always there to rescue her...after she's been securely locked up in some faraway fortress.

Peach has occasionally avoided being kidnapped and teamed up with Mario to save the day, most famously in Super Mario RPG, Super Mario Bros. 2, and Super Paper Mario. She once starred in her own game where she rescued Mario and Luigi, but all her powers in that quest were based on being over-emotional.

Peach's "Shadow Queen Peach" appearance is based off of the final boss fight in Paper Mario: The Thousand Year Door, in which Peach is possessed by the Shadow Queen.

Pre-Season: Debut in the Debut[]

Peach debuted on the 2012-12-15 Female Division debut show, competing in a six-woman Hell in a Cell match against Cammy, Tifa, Samus, Morrigan, and Chun-Li. The match was for a title shot and Peach came out on top by pinning Samus. She then went on to face The Boss for the Gurl Gamer Championship, but lost the match and her chance at the title.

Season 1: Return in the Return[]

She wasn't seen again until the Women's Division returned from its own long hiatus thanks to Bryn McMahon. Many viewers took a liking to the name "Princess PCH", which the announcer referred to her by. Her opponent was a long-awaited newcomer, Bayonetta. Having apparently forgotten about what she did to the last busty, beauty-marked superhuman with a skintight outfit, most of the audience expected a squash match, Peach defied expectations and came out on top. This earned her a seed into the Gurl Gamer #1 Contenders tournament, but received her run was cut short by when she encountered a difficult challenger in the first round in Ivy Valentine. The newcomer, running on an undefeated streak, just seemed to be a little too much for Peach, as the princess succumbed to the trained fighter in relatively quick fashion.

Peach then took a month off to nurse her loss and came back on the Season 1 finale, locked in a cage versus Jill Valentine, Chie Satonaka and Sindel. Peach began the match by squaring off against Sindel, but in the chaos wound up getting paired up with Jill Valentine. Though she quickly got the upper hand over her new opponent, she got herself carried away in unleashing her offense against her opponent and missed Sindel giving Chie the slip and escaping the cage, her superior offense for naught.

After a fairly unsuccessful first season for Peach, the beginning of Season 2 brought with it the formation of a new tag team division. This led Princess Peach to be approached by her "friend" and fellow member of royalty; Daisy. Clearly terrified of her Mushroom Kingdom compatriot, Peach meekly attempts to decline the invitation to another party. Unfortunately the Princess of Sarasland is not so easily dissuaded and begins to hurt Peach in some manner in order to force her cooperation. On 2013-07-23 the tag team Damsels of Distress would debut against Lightning and Android 18 of 18 Volts. Expecting the lovely and adored Princess Peach the viewers begin chanting her patented PCH title in expectation of her appearance. Instead of everybody's favorite distressed damsel, a dark shadowy figure comes forth! This Peach was no longer the bright and vivid heroine beloved by many but instead a corrupted Shadow Peach sporting a new entrance, dark attire and a heart as black as coal.

The twisted Shadow Queen Peach made her presence felt early, controlling much of the tag match in the starting stages but Daisy seemed to struggle with the tag format as she was unaccustomed to the thoughts of teamwork. The match seemed well in hand, with Shadow Peach DDTing Lightning straight through Table-san, until the Damsels began to get in each others' way. Perhaps whatever depraved actions that caused Peach to transform into her darker self had failed to eradicate a piece of the true PCH somewhere inside as she would dropkick her partner and begin to make mistakes. While singularly strong, the teamwork of the 18 Volts seemed to overwhelm both members of the Damsels culminating in the newly formed tag team's first loss as a unit.

She would be summoned once more on August 8th for a Last Woman Standing Match against fellow Nintendo blonde-hair Samus Aran. As the match kicked off, Peach would show why she was able to carry Daisy in their Tag match as she put on a clinic against the Hunter. Although Samus gained offense, she couldn't do much for the first half. After an embarrassing Irish whip loop by Samus, Peach would spear her through the barricade. One would think that a Spear would take someone out for the count... However, Samus as had enough energy left to make a comeback and land a Piledriver on the monarch to secure the 10 Count. After a quick conversation, former enemy Ivy Valentine was able to plan seeds of doubt about their boss Carmen into the Damsels' heads. Later that night, after Mavis Beacon challenged and won against Carmen, the Damsels ran out and joined in an attack against the criminal.

Since then, the two had a spell of being on their own. However as Daisy's matches have been less then stellar, Shadow Peach has shown to be a dominant force. She won a Hell in a Cell Fatal Four-Way against KJ Lee, Poison, and General Manager. That win put her in a Fatal Four-Way match for the #1 Gurl Co-Op Contenders, where she made in into the final two against Sheik but lost.

Then came the Female Division One Year Anniversary Show, where Shadow Peach was booked twice. In her first match, she faced former Gurl Gamer Contender Bayonetta in a rematch of Bayonetta's debut match where she lost. History repeated itself, and Shadow Peach performed a catapult Cake Cutter on her path towards victory in the match. In her second performance, she was with teammate Daisy against 18 Volts rematching Peaches debut as a Shadow. This time, history changed, and Shadow Peach pinned former Gurl Gamer Champion Lightning for the win. Other GM Samus Aran saw these wins as an opportunistic for the Shadow to bypass normal contendership procedures and face Chie Satonaka in a Casualette Championship Match. It was not Chie's chance this time, as the Queen was finally crowned Casualette Champion.

But the Shadow Queen's reign of terror would soon come to an end, she would face off against Princess Zelda but before she landed the killing blow it would appear some internal conflict would arise as the Shadow Queen would bug out and allow Zelda to sneak in the win, it didn't last long as she and Daisy would work together to dismantle newcomers Jet Set Radio, Chie would then challenge the Queen to a match at Breakdown 4 to which Peach would accept, but the Queen's confidence would be her undoing as Chie had trained hard with Elizabeth for this match and would overcome the Queen of Shadows, afterwards Chie would assist the Old Peach with the Help of Daisy in defeating her Shadow counter part freeing her from the Shadow Realm, however right after this Kitana would use her Money in the Bank to challenge the weakened Peach and take her Casualette title.

Peach wouldn't let the sour outcomes of Breakdown get her down, as she showed up on the season premier with a new look and her old cheery attitude challenging Poison to a match, however having only just recovered from being in the Shadow Realm for so long Peach would ultimately lose to Poison but her good showing proved she wasn't about to join WVGCW's band of Jobbers.

She and Daisy decided that it was time to rebrand their tag team and focus on bringing some royal flair to the Gurl Co-op scene. With their new name, "Double Dash!!" and a brand new intro including a brand new bike, the pair used their far sportier look to good effect against the newly formed Space Court. The match would go evenly for some time until Peach ran off to tag Daisy in...or so it seemed, but when Franziska ran up to stop her, she launched a CAKE CUTTER OUTTA NOWHERE and took her down for the three count with Daisy keeping Samus away, giving the newly branded team a strong, and to some surprising victory.

This victory also qualified the pair for a place in the Gurl Co-op Championship Contenders Tournament, where they faced Mad Gear in the first round. They put up another good fight, and took the twins down in style before moving on to the second round. They faced the New Witch Order, where Peach would struggle against Bayonetta while Daisy handled Sindel. In the end, the princesses were overthrown by the Queen and they were removed from the tournament. They faced the Wright Anything Agency to decide the third place winner of the tournament later, and despite another great match, they were taken down by the Agency and lost their third place position.

However, they were given a shot against the winners of the tournament themselves, RPGenie. After a long fight, the sneaky Witch Time of Bayonetta ended up interfering with Lucina, who would end up glitching out. Nonetheless, it wouldn't have made a difference when Peach caught Shantae mid dive and broke her into pieces with the Cake Cutter to win the match. This victory gave Double Dash!! a shot towards a Co-op Championship Contenders match if they could beat 18 Volts. After a long battle, Daisy slammed Lightning with the patented Daisy Cutter and scored the pin to earn the contendership chance. They fought against Steak Machina to decide the contender, but Aigis was in full blown Orgia Mode, and though Daisy was able to stand up to her and Chie, Peach struggled a lot, and was defeated by the Iron Angel. Though they failed in their attempt, the future still looks bright for the cheerful princesses. Peach has proven she doesn't need her shadowy abilities to wreak havoc, and perhaps she'll have more chances to prove herself one on one when Season 6 arrives. 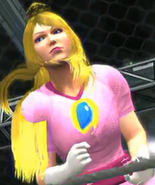 Peach before being turned into her shadow self by Daisy. Note the hair clipping.

Community content is available under CC-BY-SA unless otherwise noted.
Advertisement