Video Game Championship Wrestling Wiki
Register
Don't have an account?
Sign In
Advertisement
in: Capcom, Off Roster, Heel,
and 2 more

"There's only one story that stays the same in every universe...OUR story. No matter what universe I go to, Phoenix ALWAYS gets screwed over by Snake!...And that's how it will be until I find a universe where Snake DOESN'T win! My story will go on FOREVER if it has to!"

Phoenix Wrong was an evil version of Phoenix Wright from an alternate universe. Aided by two other alternate-Wrights and, for a time, Phoenix Wright himself, he served as the primary villain of Season 6. A murderously insane lunatic, Wrong was obsessed with finding a universe where the time travelling events of Season 4 did not occur and he was not stranded in the past by Solid Snake . While he did not appear in person until near the end of Season 6, his actions prior to his appearance and reveal reverberated backwards and forwards through the VGCW timeline, making him ultimately responsible, directly or indirectly, for every major plot event from Seasons 1 to 6 outside of the Little McMahon Saga.

In the 'Ace Attorney Franchise'[]

While an alternate version of Phoenix, dialogue spoken during End Game 6 indicates that in his universe, Wrong was not a lawyer. Ergo, who knows what form his video game franchise took. Considering his body type, maybe he co-starred in Wii Fit with Winnie.

Pre-VGCW: A Sound Of Objections[]

Exactly how the events of Season 4 played out for Solid Snake and Phoenix Wrong was never revealed, but the end result was the same: Phoenix was stranded in the past for months, forced to scratch out a living away from society to ensure he didn't cause a time paradox. Wrong took the event even worse than Wright did, as sometime afterwards he obtained a, or multiple methods to travel between dimensions and visit other 'VGCW timelines', which he began to do to try and find a universe where this traumatic event had not occured. While he found universes where I Quit matches, GM tournaments, and tag team breakups went differently, to his shock and horror the 'time travel stranding' seemed to be a fixed point in time, the sole fixed point in VGCW. Always, Solid Snake would 'screw over' Phoenix; whether this drove Wrong fully around the bend or if he was already that far gone will never be known. Wrong would ultimately form his alliance with two other versions of himself and set off on a quest to either find a universe where things went differently, or to kill every Snake and Gray Fox he could find until he ran out of universes. Ultimately, he would discover and attempt to break into the 'VGCW-Prime' universe, where his actions would end up defining many of the events of its early days.

Wrong would first reveal his presence as a mysterious voice near the end of Season 4. With Solid Snake and Little Mac having used Sonic's Chaos Emerald to travel back in time to discover who hit Little Mac with a car, and Phoenix Wright pulled along by accident, Wrong would inform Phoenix of his predicament and drive him into a panic, causing Wright to get into his car and run over Mac while fleeing the arena, hence causing the time loop that Wrong himself had once experienced. Whether it registered to Wrong that his interference was, in THIS universe, causing the very misery he had suffered was never revealed: based on some of his dialogue, he may have been deliberately punishing his alternate self for not yet having endured the trauma that had so defined him. Wright would suffer his lonely five months before returning to VGCW and turning heel, joining with Dracula for the final battles of Season 4. For the moment, Wrong went quiet, biding his time.

After staying silent for all ofSeason 5 (perhaps because he had seen universes where Kefka won, and did not want to risk getting caught in the middle of that possibility), Wrong finally made contact with Wright  again in the first show of Season 6, asking Wright to bring him and his Alternate-Wright allies to Wright's universe with the very Chaos Emerald that had stranded Wright in the past. Wright, still angry at Snake, would assault him backstage, though this would not allow him to acquire the Emerald (and would end up with him being put in a match with the newly debuting Gray Fox). Alarmed by Fox's arrival, Wrong told Phoenix to deal with him before he became a potential problem, which Wright would do, smashing Fox's head into a car window before fleeing the scene.

With Snake lacking the Emerald and Fox (temporarily) dealt with, Wrong would then remind Wright that the original owner of the Emerald, Sonic, had returned to VGCW in Season 5. Phoenix, contrite after his vicious assault on Gray Fox, and still not realizing who Wrong truly was (but obeying him anyway), would steal Sonic's locker key by attacking him in the ring, before being driven off by the newly-hired Disciplinary Committee. acquiring the Emerald from the hedgehog's locker off screen. Wrong then encouraged Wright to finish off Snake before he used the Emerald, and Wright, despite his growing reluctance, would continue to obey, though his second ambush would be thwarted by a well-timed Codec warning. Deciding to waste no more time, Wrong told Wright to finally bring Wrong to the 'Prime-VGCW' universe, which Wright did.

Wrong, now actually physically in the Prime universe, then informed Wright of his true plan to kill Snake and Gray Fox. Wright balked at the depths of Wrong's murderous hatred, and Wrong and his two allies then immediately turned on Wright, brutalizing him and locking him in Gabe Newell's basement. Impersonating his Prime universe doppelganger, Wrong would then spend several weeks setting up his plan, though a chance encounter with Adam Jensen nearly gave the game away, as Wrong's own personal experiences were different than Wright's when it came to Season 3. Jensen did not follow up on the oddly 'wrong' knowledge, though, and Wrong (still impersonating Wright) and his two Alternate-Wright allies revealed themselves to the VGCW universe at the very end of the second to last Season 6 show, challenging Snake and two allies to a three on three match. Snake would accept. End Game 6 would come.

And finally, it all went...wrong for the evil Phoenix doppelganger. Wright escaped the basement, revealing Wrong for what he was. Exposed, Wrong revealed his story and the madness that fueled it, before engaging Wright, Snake, and the rebuilt Gray Fox in a chaotic match. Despite being trapped in a basement for weeks, Wright battled most of the match himself, and Wrong, perhaps underestimating the power of justice, ate the three count after a superplex. Enraged, Wrong revealed the Chaos Emerald, banishing his own allies and challenging Phoenix to a one on one, Last Man Standing match. Wright accepted, and Wrong revealed his final secret. He was not a lawyer. Whatever his job was...

Despite his massive frame and the fury that powered it, Wrong's own rage would ultimately seal his doom. After hammering Phoenix with a powerful objection, Wrong would not wait for the count, instead going under the ring for a kendo stick to continue his beating of his doppelganger. It was the last mistake he would make: after cracking Wright with several blows, Wright would get up and catch Wrong with a powerful side Russian leg sweep, stunning Wrong and keeping him down for the 10-count. Wrong had lost.

The evil doppelganger, being a sore loser, attempted to use the Chaos Emerald to warp Phoenix away to another dimension, but his final plans unraveled in turn, as Sonic would pick that time to sprint to the ring and steal his property back, before the Disciplinary Commitee would finally emerge and drag Wrong off. It would be the last time the evil Phoenix appeared, as he would be banished by Sonic back to his dimension between Seasons 6 and 7. His plan was foiled. His story was over.

It had to be this way.

Despite only being the actual villain in Season 6, the nature of how, and when, Phoenix Wrong spoke to his Prime-doppelganger, means Wrong's actions are the source of every main VGCW plotline after the Little MacMahon Saga until the end of Season 6, when he was defeated for good.

-Wrong would cause Wright, tossed backwards in time, to run over Little Mac. This would result in Season 2 Wright investigating the matter, and Baz McMahon, playing his role in the time loop, creating Mr. L and the Elite Four, before ultimately being arrested.

-This would result in the GM position being left open, causing the Great Tournament and allowing Dracula to work his machinations and seize control of VGCW.

-Part of said machinations would be corrupting Vegeta, who would eventually throw off the brainwashing and blow himself up to try and destroy Dracula.

-Vegeta's death would result in Nappa seeking the Dragon Balls, a desire that would spread to several others in VGCW and result in the events of Season 5 and Kefka's near-ascent to godhood.

-Finally, Wrong would take center stage in Season 6, manipulating Phoenix and causing his final pieces of trouble before his defeat, finally freeing the VGCW from the spectre of Phoenix Wrong. 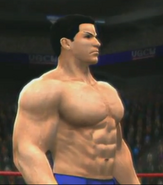 Phoenix Wrong's true self. He lifts. 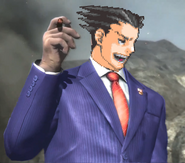 He played college ball, you know.