I sense a strong power gathering. Perhaps tonight won't be so boring after all.

Morrigan Aensland is a Playable Character in the Darkstalkers Series, and a wrestler for WVGCW. She and She-Hulk formed the Tag Team Devil's Advocate.

Morrigan Aensland is a Scottish succubus who fights other, mostly stranger monsters primarily using her shapeshifting wings which can be used to do things you probably never imagined. While she's not misanthropic or evil as one would expect from a demon, you still wouldn't want to have sex with her as you'd die in the process. She also has a really childish sister named Lilith who looks identical to her except she has short purple hair, red wings, and is flat as a board.

Also known to enjoy throwing millions of Soul Fists at various Marvel and Capcom characters while being backed up by Dr. Doom's Hidden Missiles.

Morrigan first appeared on the debut of the women's division on 2012-12-15 in a six-woman Battle Royal match. While she didn't do too badly, at one point throwing Cammy off the top of the cage, she was unable to secure victory.

After a long hiatus, she returned on 2013-04-12, where she fought the newly debuted Ivy Valentine and was defeated after a long, hard-fought match. Some speculate that she was defeated since she wasn't assisted by Dr. Doom's hidden missiles.

Even though Morrigan had yet to win a match, she was put in the number one contenders tournament against newcomer Chie. Morrigan dominated much of the match, the match having much the feel and appearance of a squash. Morrigan capitalized off of the numerous mistakes the newcomer made, culminating in throwing her off the top turnbuckle to pick up the win, her first in WVGCW. She then faced Sindel in the second round of the tournament. Though she once again dominated the match early on, Sindel proved to be a far more tenacious opponent, and staged a comeback in the latter half of the match. It would take several Shell Kicks for the succubus to wear down the wicked queen and claim victory.

Her opponent in the semifinals would be the very tough Princess Daisy, the last remaining newcomer in the tournament. The two would trade blows equally after Daisy established control in the early parts of the match, both impressing the crowd with their aerial attacks. Morrigan's strength outside of the ring seemed to give her the upper hand, as she would deliver her first Shell Kick out there and bash Daisy's head into the steel post multiple times. To top that off, she harnessed the power of Table-San and DDT'd Daisy straight through. However, Daisy was absolutely unwilling to quit, and Morrigan's strength was clearly failing near the end of the match. Assuming Daisy would not make it back into the ring in time to escape the count-out, Morrigan started to taunt the fallen princess, who made it back into the ring at the count of 9. Despite seeing Daisy rise and approach the ring within the referee's count, Morrigan chose to turn and continue taunting, perhaps misjudging Daisy's reaction time. Daisy would quickly stun and suplex the unaware succubus, cementing the surprise win. Though Morrigan lost, she gave Daisy all she could handle and came within a second of advancing to the finals; after a strong tournament, Morrigan showed she was here to stay.

Though she fell short of the ultimate prize in the tournament, Morrigan was given a chance to prove herself one more time in the season finale, where she would face off against the other tournament semi-finalist, Jessie, in the de facto third place Iron-Woman match. The two would trade DDTs, throws, and suplexes inside the ring, but neither would submit. The match would spill outside of the ring, and Morrigan took brief control with a DDT right through Table-san, only to be leveled when Jessie started using the steel stairs. It took an incredible 15 minutes for the first pin to happen, as Morrigan would take the lead 1-0 with only 5 minutes to go. From there, the match took a turn for the extreme, as strong moves began to be used almost every second. Morrigan seemed to delight in this, nailing Jessie with a Shell Kick with about 2 minutes to go, but she was unable to score the pin. This failure cost her, as Jessie hit a powerbomb and followed it by a dive from the top rope to even the score at 1-1 with 1:30 left. As Michael Cole worried about the attack to the Skull King, Jessie landed another powerbomb, but Morrigan fought out. Morrigan's experience ultimately paid off, as she reversed a superplex attempt and dove onto Jessie, scoring the final pin of the match with only 30 seconds to go.

Season 2-3: The Defence Rests Her Soul Fist Upon Your face[]

Looking to put her less-than-stellar performance at EVO behind her, her impressive performance in the #1 Contender tournament earned her another chance at the Gurl Gamer Championship, as during the Season 2 Premiere, she would be entered into a #1 Contender match against Ivy Valentine. However, despite putting in a good performance, she would eventually go down to Justin Wong Ivy for the 3-Count.

Having blown her last two chances at obtaining the title, Morrigan decided to team up with her Marvel vs Capcom contemporary and newcomer She-Hulk to form the tag team Devil's Advocate. Morrigan and She-Hulk would face another new tag team in the Chozo Raiders composed of Lara Croft and Samus Aran. Morrigan would start off the match verse Samus and while initially it was an even match, Morrigan was able to lock her down with Soulfists, facebusters and neckbreakers to force a raw tag into Lara. Unfortunately for the Chozo Raiders it didn't seem to matter who was in the ring, the sultry succubus had little trouble in dealing with either opponent. Morrigan would land her ridiculously fast 5 frame shell-kick and the match seemed well in hand all the way through. Having done plenty of work in the match, Morrigan would allow her newcomer partner to get the spotlight and the pin through sheer brute force. Although her singles title chances have been shot, Morrigan's eyes are still on the gold but in the form of the tag team championship.

The two would go on to fight the newly formed Still Alive in their next match. Faith would end up going up against the two the most, and in the end, her faith held out enough to take down She-Hulk and win the match. Morrigan would face Kitana in her next singles fight, and after a very item heavy match, would suffer so much damage that she would fall to a simple bulldog. Season 3 started well for Morrigan, with her emerging victorious in a 6-woman battle royale in her Halloween outfit. However, things didn't go so well from there. Morrigan entered a rather nasty losing streak that began with her loss to Kitana, and it continued throughout the season. She lost via count out to Shantae and a 2-0 loss to Cooking Mama. Her tag team found mixed success with two fights, a loss to 18 Volts, and a win over the debuting Wright Anything Agency. All in all, Season 3 wasn't a great success for Morrigan. But a new moon was rising, and things were to make a fun change.

Morrigan would start off THIS season badly, with another 2-0 loss to Jade. She wouldn't see action for nearly two months, before being thrown into the ring against Android 18. Morrigan gritted her teeth and refused to go down for the 3 count twice, and finally won a close match 2-1. The crowd booed in anger, and Morrigan began to develop a reputation for refusing to stay down when the crowd thought she should. To continue adding fuel to the fire, Morrigan would go on to strongly win against fan favourite, Rydia, and secure a place in the 6-woman elimination match for a Casual Contendership at Breakdown IV. Of course, a rising villainess couldn't just win the match normally. No, she had her reputation for no selling to consider, and refused to tap to any of the various submission holds locked onto her. She may not be getting cheers, but Morrigan was getting noticed. With all the eyes on her, it was like her photographers from her old intro had never left.

Morrigan would demand her Championship match with KJ Lee very lewdly. However, due to Sindel's actions, KJ didn't actually have a belt to fight for. Morrigan was most annoyed, and she was going to get her fight no matter what. She was so focused on her upcoming championship that she completely snubbed She-Hulk during a tag team match, leaving her to fight Jet Set Radio alone. Since this happened, they haven't been seen in the ring together, so it's assumed this snub was enough to break their team up.

Morrigan and KJ would fight in a ring of fire for the missing belt. The fight was close and brutal, with both wrestlers exhausting themselves. In the end, it was KJ who would hold on long enough to out do the wily succubus and halt her ambitions for the belt momentarily. Morrigan would next appear to fight popular newcomer Peacock. Despite being outplayed for the majority of the fight, the influence of Rope Breaks meant the fight dragged on very long, with both Peacock and Morrigan having to drag each other away from the ropes to pin. In the end, Morrigan benefited from this the most, and she won the fight to no small amount of booing. This win would give her another shot at the Casualette belt in another 6-woman Contenders match, but this time she wasn't able to bring it on home. Though her title hopes are dashed for now, who knows when Morrigan will strike next in Season 6, and who will be the one to suffer her anger all over their face. 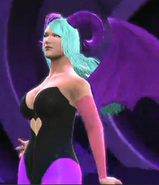 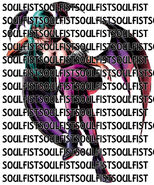 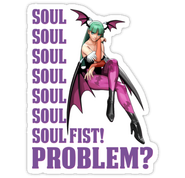 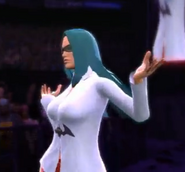