She is essentially a personification of the educational program's developer. Her face is that of Renee Lesperance, a Haitian-born woman who was discovered by the developers of the program while working behind a perfume counter at Saks 5th Avenue in Beverly Hills.

Mavis Beacon was first hinted at on 2013-04-12, when Bryn McMahon was talking with Security Guard B about getting "a teacher" to identify the Egyptian Artifact he recently acquired. Even after Bryn described her as looking "plain", many overly-nostagic viewers expected Ms. Frizzle, who is not plain in any sense of the word, to be the teacher he was referring to. In reality, Bryn had invited Mavis Beacon, who he claims taught him how to type. Apparently, Beacon actually specializes in history, explaining why he chose her. Beacon, who apparently speaks in all caps and somehow leaves empty spaces for people to repeat her, was happy to help, but the artifact was stolen before she could see it. Beacon was later seen with Bryn and Guard B, still looking for the artifact.

After the artifact was recovered, Beacon reported (in very poor grammar) that the artifact was fake. Furious about having her time wasted, she stormed out of sight. That wasn't the last of Beacon, however. She later returned to accuse Bryn, already usurped by Carmen Sandiego and beaten by Dr. Gero, of stealing the artifact and demanding he be arrested. If it wasn't already apparent by this point, she had been on Carmen's side the whole time.

After this, some nonsense took place and she betrayed Carmen and ran off with Dr. Gero, but not before donning the official VGCW replacement gear and beating Carmen in a match.

For reasons unbeknownst to anyone, Everyone's favorite Typing Instructor/Ancient Egyptian Historian crashed the 6-Woman Casualette Contendership Match at Breakdown 5. Whether or not she snuck into the match unbeknownst to security or Samus owed her a favor and inserted her into the match, we'll never be quite sure, but Mavis arrived to the shock and surprise of everyone in attendance. Mavis herself didn't seem to understand the idea of climbing the ladder to receive a briefcase, as aside from some brief and ultimately futile attempts to climb the ladder, Mavis seemed content leisurely strolling around the ring and occasionally stopping to fight whoever came her way. After her loss, it seemed like Mavis just showed up because she felt like it and we probably wouldn't see her again. But..

Mavis would again appear, this time in a steel cage match featuring Impa and Meryl. Although Mavis seemed to understand the concept of the match a little better than the Ladder Match she partook in at Breakdown, she still couldn't find her Escape Key and ended up losing the match.

Mavis remained an afterthought for most of the season, most forgetting if she was even employed or not, but she reminded us she can still show up wherever by entering the Breakdown 6 Royal Rumble. Mavis didn't exactly burn the house down, going the revolving door route through the rumble, but her reason woes combined with her interesting style, outfit, and personality have endeared her to some fans. You never know when Mavis might show up, but when she does, you can definitely expect cheers of ___________ from the audience. 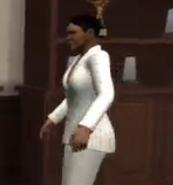 Add a photo to this gallery
Retrieved from "https://vgcw.fandom.com/wiki/Mavis_Beacon?oldid=39886"
Community content is available under CC-BY-SA unless otherwise noted.