Liquid Snake is a villain from the Metal Gear Solid series and a former wrestler for VGCW. Two years after being released from VGCW, Liquid Snake participated in Star Road 2 and shortly after joined the ranks of EDBW. He is a former EDBW Champion and the longest reigning in the titles history, holding it for over 6 months before losing at Killscreen IV.

Liquid Snake is another clone of the legendary soldier, Big Boss. Like his twin Solid Snake, Liquid was genetically altered before birth so that the two of them would express different genetic traits. Liquid, having less understanding of genes than a middle schooler, was tricked into believing that he received inferior "recessive genes." He used this inferiority complex as an excuse to try and threaten the world with Metal Gear REX, impersonate one of Snake's old friends, and stand around Alaska without a shirt on. He was later killed by an... assassination vir- okay, Metal Gear Solid writers don't understand genes very well.

In Metal Gear Solid 2, Liquid returned as a ghost inhabiting an arm grafted onto former ally Revolver Ocelot. MGS3 tried to explain that Ocelot's dad was a spirit medium who talked to ghosts so it all made sense. Then MGS4 said "fuck it" and had Ocelot remove Liquid's arm so that he could replace it with a robot arm and also hypnotize himself with nanomachines so that a fake Liquid personality would take over his own personality. This was done because Ocelot was tired of a ghost Liquid personality taking over his own, and decided that a fake hypnosis Liquid personality would work better. Ocelot had to keep up the illusion of being possessed by Liquid's ghost arm so that he could trick a computer into believing in ghosts, the ultimate goal of 50 years of plotting.

Yes, you read everything in that last paragraph correctly.

Liquid appears again in Metal Gear Solid V as a twelve year old kid. He's a child solider and a little brat who hates his clone-dad and is a complete asshole and saved the world by being really pissed off.

Liquid Snake debuted in the first Royal Rumble match of November 21st 2012, entering at #5. He later appeared in his first singles match in the King Of The Ring tournament that night against Nappa, but didn't win. He did win his next match against Gaben on November 25th, proving to the world that he was no scrub. There are rumours that after the match, Liquid attacked the referee.

He teamed up with Bison and Wily on November 27th to fight Guile, Proto Man and his old nemesis David Hayter. It took 30 minutes until someone got eliminated. Snake was that man, getting DQ'ed for staying in the ring too long as an illegal man. Wily and Guile were shortly eliminated after. During this time the referee threw Liquid Snake onto the mat for unknown reasons. Bison eliminated Glitch Man to win the match for his team. Liquid did not eliminate anyone, but he grew a fondness for Tuesdays.

He participated in a Battle Royal match on December 9th. He eliminated Luigi from the match, made it to the final two, but was crushed by the Batman.

On December 12th, he took part in a Hell in a Cell-themed King of the Ring tournament. However, he was disgusted by Piccolo's entrance in their Round 1 match when he came out with a daily dose for Liquid and the entire audience (featuring his favorite patient Vegeta) being displayed on the Titantron. Seeing Piccolo's solid snake enraged Liquid, giving him the means to defeat the alien quickly. After the adrenaline rush from his victory wore off, Liquid realized the danger Piccolo had put VGCW in. While his experience as a terrorist might have allowed him to stop the twitch cops from shutting down the broadcast, they didn't show up until after the tournament, from which Liquid was later eliminated by the familiar Gaben in Round 2.

Liquid Snake's finest hour came on January 6th 2013. Jealous of his brother's fine jeans, Snake showed up with a new look to face Liquid Snake in a Last Man Standing Match. Despite Solid Snake's new upgrades, it would ultimately be Liquid Snake proving his his genetics to be the superior ones once and for all, as he quickly disposed of his brother to win the match. Of course, Solid Snake was awarded with a spot in the next KOTR tournament, and the superior snake was left out on the action.

Instead, he was placed into another Battle Royal match, this time for a shot at the Casual Championship. Again, he made it to the final two, eliminating Scorpion to get there, but a Sonic Boom Powerbomb from Guile ended his chances for the title.

Following that loss, Liquid was unceremoniously released by Baz McMahon. While many fans thought his released was unjustified, it would take over 7 seasons for Liquid to get another shot in VGCW.

Liquid would unexpectedly get that shot as one of the voted-in candidates of Star Road 2, which was unheard of considering his status as a VGCW alumni. And as fate would have it, his first opponent would be none other than Revolver Ocelot, the guy who he possessed in MGS2 and resulted in that whole convoluted plan mentioned above. Despite a close battle, Liquid was ultimately defeated, and neither he or his MGS2 host Ocelot would make it to the main roster.

After his performance in Star Road 2, Liquid wasted little time in continuing his comeback, and after a Royal Rumble appearance made his official EDBW debut against Shovel Knight, in what was decided to be an Inferno match by the audience. After an extremely close match, Liquids endurance allowed him to ultimately pick up the win and kick start his EDBW in a big way.

His victory was so impressive that he was granted a title match against the current Champion Lucas in a triple threat also involving Guybrush Threepwood. After another long and arduous match, Liquid once again prevailed by using his superior genes and tactics to dispatch both opponents and pin Guybrush, winning the company's title in only his second match.

After riding the rocket to the top so quickly, Liquid was faced with his first challenger in the form of a 2/3 Falls match against Vyse at SNST: One Night Stand. Vyse was both an SNST original and tag team partner to the man who Liquid pinned for his championship, which gave Vyse so much momentum going into the match that there were threats of mass riots if Liquid would have won. What followed was a classic bout, but one that Liquid was quickly losing his grip on at the end. With the score tied at 1-1 the boyhood dream of Vyse was almost certainly going to be the conclusion, but a last second desperation move in the form of a top rope Arm Drag assured that Liquid would grab victory from the clutches of defeat. Fan rioting ensued, and Liquid was left at an all time high of smug self satisfaction.

Despite beating both of The Dashing Rogues back to back, Liquid was quickly met with his newest challenger in the form of Sho Minamimoto. This would noticeably be the first title match in EDBW history to feature a plot buildup, with Liquid taking the time to fire shots at his brother Solid Snake before their match, only for Sho to interrupt and give the Superior Snake a lesson in math. The two came to a head later that night in another 2/3 falls match, and were so evenly matched that they went close to 15 minutes before either man could manage to get a single fall over the other. Luckily for Liquid it wound up going to him, and in another display of his tactical genius used a Codecbreaker/Right Arm combo to gain two consecutive falls on Sho, ending the barn burner at 2-0 in decisive fashion.

After surviving his gauntlet of title defenses, Liquid promptly decided to crash on his personal couch backstage, refusing to do anything until Killscreen 4. In a shocking turn of events it was Eddie Riggs, a formerly purged EDBW wrestler, who made his return to win the rumble.

After winning the rumble, Riggs was quick to justify his return, stating that his job as a roadie meant he couldn't stand by and watch Liquid dominate while showing so little regard for EDBW, intending to be the one who takes both the company and the Championship back. This call-out was enough to finally get Liquid off of his coach, who proceeded to deliver a monologue rebuttal about how he did in fact consider EDBW beneath him, only coming to the promotion due to how easily he saw his old friends Kratos and Dante win its title, which Liquid too ended up replicating with ease due to his self proclaimed superior skill. The heated exchange sparked a brawl between the two, which the General Managers and Little Mac were forced to put a stop to.

With their title match getting extremely personal, the two were booked in a Mixed Tag Team Match also involving the EDBW Women's Champion Sophitia and her Killscreen 4 challenger Morrigan, who Liquid would be teaming with. Prior to the bout, Liquid took the opportunity to trash talk Eddie even more, who's backstory Liquid had studied extensively, bringing into question Eddies decision to return to EDBW despite having everything a man could want. Although both men lived in the shadows of the sins of their fathers, Liquid claimed that only he possessed the drive to surpass his, and that he would save Eddie the trouble of forcing him back out of the spotlight after their final battle. In the main event of that broadcast Liquid and Eddie finally got the chance to go head to head in the ring alongside their female counterparts, although the finish would ultimately be when Liquid, once again showing his complete disregard of others, allowed Morrigan to be pinned by Sophitia without even attempting to break the pin, possibly hoping to make it to Killscreen without any unnecessary injuries, or maybe just taking offense to Morrigan trying to be even more smug than he is.

Despite their rocky partnership, Liquid and Morrigan were still on friendly terms (Maybe due to a mutual smugness), with the two sharing a brief moment to discuss their upcoming matches. What awaited Liquid, however, would be no mere man, but a demon. At least that's what it had the appearance of, as Liquid was quick to scold Eddie after making his grand entrance, accompanied by Sins of the Father, claiming that demons aren't forged through dressing up with wings and fangs, but through action. After reflecting on the audiences thirst for war, Liquid knew that he was already the true demon. He was born for violence and conflict, and a god on that battlefield.

The two demons waged a long and brutal war, holding absolutely nothing back against one another as they battled through the fire and flames. Following many sequences of back and forth action, they were eventually able to pin one another, bringing the score to 1-1. With their climatic final battle quickly reaching its finale, it would ultimately be The Roadie who would clench an emotional victory, finally bringing a triumphant close to his ultimate comeback story with Liquid, at long last, being defeated.

Liquid is one of the three former VGCW roster members who have won the EDBW Men's Championship, with Kratos and Dante being the other two. 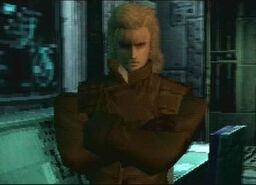 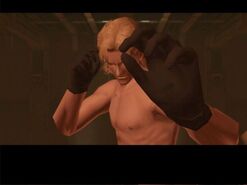 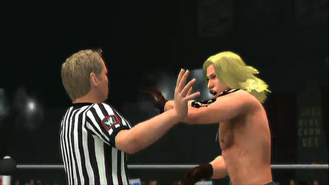 Liquid ready to strike the Referee down 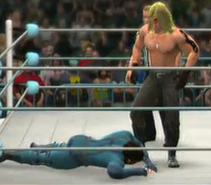 Liquid as champion
Community content is available under CC-BY-SA unless otherwise noted.
Advertisement