You will learn respect!

Princess Kitana is a character from the Mortal Kombat series and a wrestler in WVGCW. She is a former Ms. Money in the Bank and Casualette Champion. She and her fellow Mortal Kombatant (and mother) Sindel briefly joined forces as Maternal Kombat until she rebelled against her mother for disapproving of her idolization of WWE Diva AJ Lee. Since disobeying her mother, Kitana had taken on more of AJ's personality, including wearing her attire, colors, and imitating her entrance, until she lost to Sindel at Breakdown F.I.V.E and was forced to drop the gimmick and return to how she once was.

Kitana is a female ninja and princess who competed in most of the Mortal Kombat tournaments with her childhood friend Jade.

The adopted daughter of Shao Kahn, she originally fought on the side of Outworld before learning that Kahn conquered her home realm of Edenia, killed her real father and brainwashed her mother Sindel.  Kitana then ends up switching sides and aids Liu Kang in defeating Kahn in the Mortal Kombat Tournament. She also has an evil clone/twin sister named Mileena, who has a face that not even a mother could love. She uses fans made of blades as her weapon of choice.

Kitana debuted on 2013-01-06 in a match which she lost. She is currently the only character to have shared a theme with another wrestler, Scorpion, who is far more interesting. She did not appear in another match until 2013-04-22, three broadcasts into WVGCW's second season.

When she finally did return, however, she came with a costume change, a new theme song, and she was booked for an inferno match against her own mother. Despite being told that she... would die, it was Sindel who would end up getting pushed through the flames. Fortunately the two seemed to have patched things up, as Kitana has been seen at Sindel's matches with a big 'HI MOM' sign.

By virtue of her strong performance against Sindel, Kitana was entered into the Gurl Gamers #1 Contender Tournament, where she would first have to face off against Chun-Li. Kitana came out of the gates strong, but allowed Chun-Li to sneak back into the match with a Spinning Bird Kick. However, after stealing Chun-Li's finisher and unleashing some Spinning Fan Kicks of her own, Kitana would score the pinfall and advance to the 2nd round where she would face Team Rocket's own Jessie. Unfortunately, Kitana was unable to withstand Jessie's Seismic Toss and was ultimately eliminated from the tournament.

Following the disappointing loss against Jessie, Kitana was looking to comeback strong in her next match on the Season 1 finale against a fairly weak opponent in Rinoa Heartilly. In this 2/3 Falls match, Rinoa would surprise many viewers by actually dominating the early part of the fight against Kitana and even secure the first pinfall of the match. Kitana then realized that she was losing to the worst wrestler in the division and began to take control of the match securing the next two pinfalls despite Rinoa's gravity defying top rope maneuvers.

The onset of Season 2 would bring with it the creation of a new tag team division for the WVGCW. Among the new tag teams formed was the alliance between Kitana and her mother Sindel to create Maternal Kombat. The mother-daughter unit would debut against the Cobra Twonit as the very first tag team match of season 2 on 2013-07-23. Kitana would spend most of her time on the sidelines allowing Sindel to do most of the grunt-work. When Kitana was in the ring, the majority of her time was against a newcomer with rookie eyes. Meryl showed that despite being very green she was no pushover and overpowered Kitana leading to a loss in the tag team's first match.

On 2013-08-08, Kitana would take part in a Hell in a Cell match as part of the ongoing VGCW vs WWE series. Her opponent would be none other than AJ Lee, who had once cosplayed as Kitana for Halloween. Kitana set out to prove that an imitation was no match for the real thing, but both competitors soon found themselves outside of the ring, tearing each other to shreds. The match had devolved from a wrestling showcase to a catfight, and from a

catfight to outright insanity. Because a certain someone forgot to mention  to them that falls count anywhere, the match went on and on with no end in sight. The tedious fight had to be called off, and was eventually resumed on the next episode of Monday Night RAW, where AJ Lee prevailed with surprising quickness. Thus Kitana was responsible for the VGCW's first loss since Vegeta lost to Ryback nearly eight months prior.

After that, Kitana's career had its ups and downs..mostly downs, as she lost more often than not. However, the next season would bring about a change in her fortunes...

Kitana's season started with a rematch with AJ Lee. This time, 2Kuality didn't rear its ugly head, and Kitana avenged her loss strongly, winning the fight 2-0 and proving herself.

Meanwhile, drama backstage led to the second Ms. Money in The Bank match being held. Kitana was one of the contestants in the match due to her strong win over AJ, and she seized the opportunity, and the briefcase. With her mother Sindel desiring title gold, and Kitana holding a guaranteed title shot, they will end up at odds sooner or later...

Kitana would cash in come Breakdown IV..but not on the Gurl Gamer title, as was expected. Instead, she went for the Casualette Championship, held by a recently freed from captivity Princess Peach. Due to Peach having only just returned from the shadow world, she was in no fit state to fight, and Kitana took advantage of this, strongly defeating her. KJ Lee took the Casualette Championship easily, and Kitana would successfully claim a belt before her ambitious mother could.

Kitana would brag to her mother about her victory, as she had managed to secure a belt before she could. Sindel would insult her for going after the Casualette belt instead of the main one as she was, and would attempt to prove she was better than her daughter in the topcard scene. However, a loss to She-Hulk put a short stop to her ambitions of the top. KJ would find this pretty funny until Sindel snapped and, in an unprecedented move, stole her belt from her before running away. Sindel would wear the belt to the ring and never let it out of her sight, making it impossible for KJ to reclaim it.

The casualette contender, Morrigan, refused to accept that Kitana had lost the belt, and demanded a fight with her anyway over the championship. The two fought in a brutal inferno match, but in the end it was KJ Lee who would stand up to all the succubus could throw at her and emerge the victor, giving Morrigan the message that she should stand back for now and put her own ambitions on hold. Kitana and Sindel would continue to argue over the belt. Sindel would refuse to return it, claiming she intended to use it as a way to push into the main title scene by holding it ransom.

Finally, the two would be forced to settle things between themselves in Mortal Kombat. Sindel was given the chance to earn the casualette belt properly if she could defeat KJ Lee, which KJ was eager to accept. The two fought at Breakdown F.I.V.E, and unfortunately for the young princess, the queen was not to be trifled with. Despite her best efforts to stand up to her mother, KJ Lee wouldn't be able to pull back from being behind the whole match and suffered an 8-5 defeat. Rather than finish her daughter off, as Mortal Kombat states, Sindel felt oddly merciful and instead killed her gimmick. Pushing KJ Lee into the flames, she emerged in her traditional blue ninja outfit. KJ Lee was killed in kombat, and only Kitana remained, beltless and humiliated.

Defeated and humiliated. Beltless and friendless. Kitana was left with only one option: fight. The new assistant GM, GLaDOS came up with a brutal regimen for her: a Challenger Tower of seven opponents that she must climb before she could face her mother again. Kitana rose to the challenge, with two impressive early victories against Poison and Morrigan. In the second half of Season 6 she was placed in a "Mirror Match" against Kitana. Kitana was the toughest opponent that Kitana had faced since her mother, but Kitana was able to defeat Kitana. She continued to climb.

In Season 7, her first opponent was Tifa Lockhart. Her string of victories continued, and people started to wonder if this "Challenger Tower" was actually beneath her. Her next opponent was a handicap against The Witchpac, but instead of being forced to fight a match she had no hope of winning she was joined by Poison, who had nothing better to do. The two unlikely allies managed a victory against the witches. The tower's penultimate challenge was another unexpected one, against Table-san in a tables match. Kitana was able to put one table through another table, and she continued to her final opponent. Main Eventing the night, the last opponent on the Tower was Rydia. The near-psychotic WVGCW Co-Op Champion who like Kitana had a huge career resurgence in the past two seasons and who was looking to use this match to break into the WVGCW Championship title scene. In the hardest fought match of the whole Tower, Kitana stood victorious. The climb was over. But at the top stood Sindel, who had a climb of her own- into the position of #1 Contender for the WVGCW Championship. 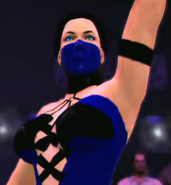 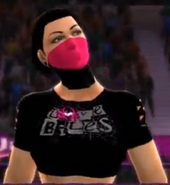