Jill Valentine is a recurring protagonist in the Resident Evil Franchise, and a wrestler for WVGCW.

In the Resident Evil series[]

born in 1974, Jill Valentine was a member of Raccoon City's S.T.A.R.S. (Special Tactics And Rescue Service) Alpha team, along with Chris Redfield and Albert Wesker (among others, mostly casualties). In the original Resident Evil, she investigates a bizarre mansion which turns out to be a super secret research facility for Umbrella Corporation, and after Wesker pulls a Heel Turn and supposedly meets his demise, she and the surviving members of Alpha team defeat the T-002 Tyrant and escape. She returns as the protagonist in Resident Evil 3, where she is trapped in Raccoon City and escapes it and a monster known as the Nemesis-T Type before the government bombs it.

She and Chris later form the Bioterrorism Security Assessment Alliance (or BSAA for short), but is later declared dead after what should've been a basic mission goes horribly wrong when they run into Wesker and she tackles him out of a window. Neither of them died however, and Wesker placed Jill under her control before the events of Resident Evil 5, but is later freed thanks to Chris and company.

She is also well-known for her amazing skills, such as unlocking stuff and not becoming a sandwich.

Jill only made one appearance before Bryn McMahon took over VGCW's female division, in which she fought Sindel and lost. Of particular note was the awful, RE3 like costume she wore as she made her entrance. During the WVGCW reboot episode on April 6th, Bryn McMahon and Security Guard B (no, not that one) urged Jill to consider a change in wardrobe, much to her dismay. Later that evening, now adorned in her S.T.A.R.S. uniform, Jill took out her frustrations in the ring against The Boss. Much to the upset of several audience members, Jill proved herself to be the superior soldier by pinning the Atomic Age war hero (after assaulting poor Table-san).

Defeating The Boss, however, didn't really prepare Jill for her further travails in the league. Her woes began when she faced off against Ivy Valentine on the April 22nd show in a 2/3 Falls match. Though Jill would take control of the match early and pick up the first pin, the newer wrestler would pick up steam later in the match and win by a score of 2-1. Then, on May 2nd, Jill was in a triple threat match against Princess Zelda and Lara Croft in which she spent the early part battling Zelda, then spent most of the rest of the match targeting Lara. Jill made it obvious she wanted Lara when she left the ring on one side, only to go to the other side, run in and give Lara a vicious drop kick in the back. Unfortunately, Jill's mind was too dead-set on Lara, as when she landed the Frankensteiner on Zelda, Zelda countered it and eliminated Jill from the match. Another match two weeks later against the (somewhat) newcomer Videl ended the same way. Jill was found to be at the mercy of Videl throughout most of the match, which ended in a Jill Sandwich being made as she was sent through the barricade, losing via count out.

Following that hat trick of losses, Jill got another shot to prove herself during the season finale cage match, and would face off against a relatively easy field. She smartly paired up against arguably WVGCW's weakest competitor in Chie and promptly began fighting her, though in the chaos of the match she'd eventually wind up switching against Peach instead. Ultimately, Sindel managed to fight off Chie and escape, with Jill unable to do anything about it due to being at the mercy of Peach's superior offense. Still with only one win in now 6 attempts, Jill was in serious need of a comeback in the next season or she might well end up being a jobber among the S.T.A.R.S.

After months and months of not winning another Singles Match (her last win being against Chie), Jill's WVGCW job was put on the line at Breakdown 2/3 along with Ulala's job. As the match began, Jill was on the wrong side of the punishment as Ulala landed offense of her own and landed her finisher against the member of S.T.A.R.S. Things looked bleak for Jill until she used her patented Sandwich Cutter on the outside to make Ulala say I Quit and for Jill to keep her job. As the crowd thanked Jill for getting rid of Ulala, could Jill keep her sudden popularity enough for her to not be in another I Quit match?

Jill would begin Season 4 as most people expected at this stage; with a loss. She managed to get a pin against The Boss, but would ultimately lose 2-1. Jill would come out to another Curtain Jerk next month in a match against Shaundi. Despite being alone while Shaundi had Roll as a manager, Jill somehow managed to pull off the win. The crowd were surprised, but not impressed. Shaundi wasn't the biggest obstacle to overcome. One month later, she would come out to another lowcard wrestler, Impa. Showing a surprising knack for curtain jerking, Jill would pick up another win. But then, this must have been a few flukes against the weakest, right? It's not like Jill was going to go from nearly being fired to having one of the biggest winning streaks in WVGCW, right?

Season 5: The Master of Curtain Jerking[]

Well actually...Jill was put in another curtain jerk at the start of Season 5 against some stronger wrestlers, Rinoa and Samus. In the 2/3 falls match, both Rinoa and Jill scored a pin, but while Rinoa was preparing her finisher via tantrum, Jill snuck in the second pin and won the match, giving her a three match winning streak. Some episodes later, she was put in ANOTHER curtain jerk against Cooking Mama and Android 18. This time, she not only defeated Mama and 18, she beat up Mama so hard she was laid out in the ring for a good 5 minutes until Jill won the match. It was getting pretty clear for all to see that Jill wasn't just securing her job, she was ready to go for the gold. She would be given another challenge, in the curtain jerk of course, in a one on one match against Roll, who was far from a pushover; if Jill could pull off a win, it would be the final proof that her days at the bottom were behind her, and she won the match 2-1. It was clear that she was ready, and Jill was booked into her first ever contenders match at Breakdown F.I.V.E in a Six-Woman ladder match to determine a #1 Contender to the Casualette Championship, and while the competition was fierce, in the end the shot would go to Shantae instead. But while this was quite an eventful occasion for the Master of Unlocking, she would find herself in what would soon become a crime scene, as after having a short conversation with Chun-Li, she would walk past Chun's attempted assassin, making her the only person who saw the attacker...

All signs pointed to Chun-Li's former partner Cammy White being the attacker, and with Jill being the only witness, Cammy came to her to plead with her to tell people that she wasn't the one who attacked Chun-Li; however, not even Jill believed that Cammy was innocent, which didn't stop her from pestering her over the coming weeks, eventually boiling over to the point of frustration for Jill, and she challenged her to a match; if she won, Cammy would stop following her around, and if Cammy won...well, in Jill's words, she wouldn't. Which is exactly what happened, as despite Cammy giving it her all, all it took was one Sandwich Cutter to put down the Delta Red agent. 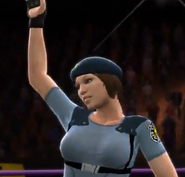 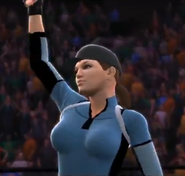