Jessie is a wrestler in WVGCW. Much of her early success and fame came from singles matches against Gruntilda, but she also made a deep run in the Gurl Gamer #1 Contender tournament.

In the Pokémon series, Jessie is a member of Team Rocket, along with her partner James and their Meowth. Team Rocket has been chasing Ash Ketchum for, like, ever. Or maybe not even a year. The anime's chronology is weird.

She also appeared, in a way, in Pokémon Yellow, in which she and the other two Rocket members reprised their anime role. Sadly for them, Red is a heck of a lot more competent than Ash, and ruined them several times, usually in a sweeping rout.

Jessie lost her first two matches back in the pre-show days of WVGCW, but went into the hiatus on a high onte by defeating Gruntilda in a thrilling match that saw both Stairs-kun and Table-san fall victim to the brutality of the two fighters.

When the female division returned, Jessie once again faced off with Gruntilda, with the barricade falling in the line of battle that time. Even after enduring tremendous amounts of punishment, Jessie managed to counter Grunty's finisher into one of her own to blast off with the win.

The feud with Gruntilda continued on the next show in a 20-minute Iron Woman match. Jessie fought back from being slammed through Table-San and a 2-0 deficit to tie it up, but it wasn't meant to be. Grunty picked up the next two falls and handed Jessie the first loss of the feud.

Nevertheless, her strong performances against Gruntilda earned her a spot in the Gurl Gamer #1 Contender tournament, where she would face off against Samus Aran in the first round. Some were concerned that she wouldn't be prepared to fight anyone that wasn't a rhyming witch and that her break from WVGCW action left her rusty, but Jessie put those concerns to rest by dominating much of the match. Ultimately, Jessie would reverse a superplex attempt and score the quick pin, moving on to the next round against the previously undefeated Kitana. Kitana seemed to have the edge on Jessie while the match was in the ring, but Jessie pulled off a reversal and DDT'd Kitana straight through Table-san, taking complete control of the match. Ultimately, Jessie would deliver a crushing facebuster and score the pin, moving on to the semi-finals.

The semi-finals held an entirely new challenge in Terra Branford, who the odds touted as a favorite and was expected to walk away with the whole thing. However, Jessie would not go down easily to the heroine, even taking control in the early stage of the match and sending Terra to the floor with a backbreaker. From there, the two traded moves back and forth in the ring, and some thought that Jessie could pull the surprise win off. However, Terra did what she's known best for: a crushing, dizzying series of Terraplexes, DDTs, and high-flying moves that Jessie had no answer for. Despite being pinned shortly thereafter, Jessie was perhaps the first to show Terra's potential mortality in the ring, and had a very strong tournament showing overall. This, unfortunately, didn't intimidate her fellow semifinalist and season finale opponent Morrigan. Though she fought hard during the entire twenty minutes of the Iron Woman match and managed to tie the score 1-1 during the waning minutes of the bout, Morrigan managed to get the better of the Rocket at the last moment, winning the match 2-1 and giving Jessie another loss to chew on.

Having weathered a pair of heartbreaking losses near the end of the last season, things weren't looking up for Jessie. But with the newly announced Tag Team Belt up for grabs, maybe this was her chance? She knew just the partner, but her attempt to register Team Rocket as a tag team failed when the new big cheese denied it due to mixed gender. Not to be tossed aside, James classified himself as Jessie's Manager and joined her in a match against Faith. Unfortunately, as with all Team Rocket harebrained schemes, it didn't amount to anything, as new clothes don't make you a better wrestler and all James could really do before Jessie folded to a Coast to Coast from Faith was to tap on Faith's shoulder, get shoved and bother the ref a few times. 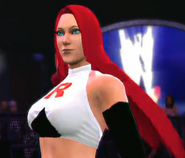 Jessie's Old Appearance
Add a photo to this gallery
Retrieved from "https://vgcw.fandom.com/wiki/Jessie?oldid=38321"
Community content is available under CC-BY-SA unless otherwise noted.