Jade is the protagonist of the cult classic video game Beyond Good and Evil, and a wrestler in WVGCW, where she is the former Gurl Gamer Champion.

In Beyond Good & Evil[edit | edit source]

Investigative reporter, photographer and amateur spy, Jade is a multi-talented up-and-comer. Previously living on an isolated island with her uncle Pey'j and orphans under her charge, she lived a quiet life. When the DomZ attacked her home, she accepted a job to do some photography. This turned out to be a test, to see if her mind and combat skills were up to the standards of the IRIS Network, an underground resistance. After joining, she was able to uncover the crimes of the Alpha Squadron, start a revolution, and discover secrets about her past.

Jade came out to both massive pop and massive "who?" in her 2013-07-17 debut against Lara Croft. Despite a strong initial showing by Jade, Lara was able to gain the upper hand for a moment as she speared Jade through the barricade, keeping Jade out of action just long enough for the count of 10 before she could return to the ring. Fortunately, the chat seemed to stick by her, turning against Lara rather than labeling Jade a jobber.

The next night, Shaundi invited Jade to a game of go fish with her tag team partner Roll. Shaundi was upset that Jade underwent the same fate of her first match, and offered to take care of Lara personally. This lead to a Backstage Brawl that ultimately gave Lara another victory. It is believed that Jade could have cared less about revenge as she couldn't even get a word in edgewise to Shaundi. She would then be put against Jessie with James coming to her aid as a manager, but Jade was eager to make up for her debut loss, and dominated the Rockets completely, giving her a win. She was then placed in a 6-woman Battle Royale amongst other Season 2 newcomers, but no one was able to stand up to the emerging powerhouse of Ayla, and Jade went without a win.

Jade isn't the type to give up easy. After losing a 6-woman match at the end of Season 2, she leapt right back into another for the first episode of Season 3. Her halloween outfit didn't help her in the match though, and she was the first to be eliminated. She would find better luck back in the singles scene against Kitana. The match was close, and Jade was forced to use a roll-up to end it, drawing some ire from the crowd, but further proving herself as a competitor. She tried to continue this momentum against Kitana's own mother, Sindel, but the Queen of the nWo had enough Queen Driver's to keep Jade down for the 3 count.

Continuing her tradition of fighting during the season debuts, Jade started off Season 4 herself in the curtain jerk against Morrigan. Despite the succubi's best efforts, Jade refused to stay down, and was able to win the match 2-0. She managed to keep this momentum going and took down the renowned Poison. Despite the fact the audience now didn't know who's town it was, the crowd were starting to see something in Jade to finally bring her into the spotlight. She was entered into the 6-woman elimination match for the Casualette Contendership, but despite coming close, the rising heel Morrigan got revenge for her previous loss and eliminated her last.

Season 5: I've got a feeling the best is to come.[edit | edit source]

Jade could sense the audience shifting, and she seemed to know that now was the time to act. Her first match of Season 5 was against Franziska Von Karma, and she made sure to put on a fantastic show for the crowd. More and more people were beginning to support Jade and were cheering for her. The decision was made that she should be given the chance to break into the topcard and mingle with the strongest wrestlers in the company. However, she came up short against the powerhouse of Lightning. Despite Jade showing great strength, she was unable to take down the former champion, and it seemed as if her push to the top was to be cut short. However, she had heard the support she was now getting from the fans, and this confidence would come into play next season.

Cate Archer began her season with a message to the audience. That, having won the Championship belt at Breakdown F.I.V.E, she was worthy of their respect and adulation. As the crowd jeered, Jade burst onto the scene to counter her claims. She asked Cate if she had felt that her best wasn't enough, if she had ever been kept awake at night thinking of protecting people. She challenged Cate to think about this question before demanding undisputed respect, then left the ring without a word.

Cate would come back at her, claiming that although she couldn't agree with Jade's feelings, her accomplishments more than made up for it, and she deserved praise for the countless lives she'd saved. Jade argued that it wasn't her job to praise Cate for what she'd done. She just asked if she had ever felt anything for the lives she'd saved, and she had no right to demand respect for it.

The next episode, Jade would claim that she intended to simply forget about Cate, apparently satisfied that she wasn't worth the effort. She said she wanted the chance to prove herself in the topcard again, after her loss to Lightning had kept her out. To do this, she challenged the Co-op Champion Lucina to a match. The slog went on for around 20 minutes, with both wrestlers battered and broken by the end, but it was Jade who finally scored the pin and finally cemented herself in the highest leagues of the company. However, Cate Archer attacked her after the match, claiming to be able to see through her plans, and saying she wouldn't be taking the belt from her.

Jade confronted Cate next episode to demand an explanation. Cate calmly explained her reasoning. After all Jade had done to antagonise her, it was obvious to Cate that Jade was aiming for her belt, and her attack was a warning that she would suffer if she tried. Jade, however, said she never intended to do that, and was simply stopping Cate from demanding respect she didn't deserve. However, after what Cate had done, she had every intention of reaching up to her level and kicking her ass herself. She challenged Lightning to a rematch in a Championship Contenders match, and began her ascent to take Cate down from her high horse for good.

A victory over Lightning told the world that Jade was ready for the big time, and Cate was finally forced to go head-to-head with the rising star. Cate decided not to delay the fight to Breakdown, choosing to defend on a regular show. It made no difference to Jade, who was able to string together a great deal of offense in the second half of the match and strike her first taste of gold by winning the Gurl Gamer Championship. 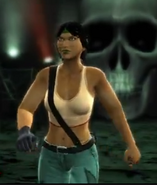 Jade's halloween alternate outfit
Add a photo to this gallery
Retrieved from "https://vgcw.fandom.com/wiki/Jade_(Beyond_Good_%26_Evil)?oldid=41128"
Community content is available under CC-BY-SA unless otherwise noted.