You brave lad...we must protect this beautiful land of Hyrule!

Impa is a recurring character in the Legend of Zelda, and a wrestler in WVGCW. She and Princess Zelda/Sheik form the Co-Op Team The Last Sheikah.

In the Legend of Zelda series[]

Impa has been Zelda's maidservant in all her appearances. She has had many looks, from an old lady to the Sheikah form seen in Ocarina of Time.

Her most well received appearance came from the non-canon Hyrule Warriors, in which Impa is a general of Hyrule's army and a close and trusted friend of Princess Zelda.

When Zelda learned of the Gurl Co-Op title picture, she asked her old teacher, Impa, to join up with her as a tag team. Impa agreed, and headed to WVGCW. Their opponents happened to be Camstrings, and Impa was introduced to WVGCW in a painful fashion, taking the lion's share of the punishment in the match.

Next week, Zelda wished Impa good luck in her first singles match, and told her not to hold back no matter who she thought. Her words became clear when it was Zelda herself who came out to face her. After a hard-fought battle, the princess put the training Impa had given her to good use, and took the Sage down.

Impa and Sheik started off their season well by taking down Two of the Witches Three, dominating the match but having to score the pin via a roll-up. She showed up a month later to curtain jerk the show against Rydia, who was struggling to find a win for herself. She didn't have far to look tonight though, and Impa lost the 2/3 falls match in a 2-0 loss. She knew she had to work harder to prove herself, and when given the opportunity to do so in a 6-woman elimination match, she held on long enough to pin Wii Fit Trainer for the victory, much to the crowds anger.

The crowd were given a chance to vent when Impa went up against Tina Armstrong in one the craziest and most dangerous tables matches the WVGCW had ever seen. With tables breaking all over the place, high jumps being missed and bones looking considerably brittle, it seemed as if the match would have to end prematurely depending on whether the wrestlers or the audience could last until the end, but finally, Tina managed to land a proper hit on Impa, breaking the table and scoring the win.

Impa and Sheik went up against Saints Roll in their next match, and with an intro far more modern than anyone was expecting from the old Sage, the pair were able to keep the Saints down for the 3 count and score a shot against Still Alive for the Co-op belts next season.

Impa's old knees may have been feeling creaky from all the strain from her previous matches, but that was nothing a little modern medicine couldn't fix. With painkillers at the ready, Impa and Sheik went out to face Still Alive in a Tornado Tag Team Match, and were summarily crushed within ten minutes. Winners don't do drugs, kids!

After being woken up by a confused Zelda and pointed in the right direction to the ring, Impa went up against Videl in a singles match. Impa showed a lot of heart, but that was all she could muster against the Daughter of the Hero of Earth, and she suffered another loss. Her and Sheik went up against 18 Volts in another Tornado Tag Team Match, but it seemed as if that was their weakness, as they were once again beaten quickly. Desperate for her first victory, Impa went up against another star looking to make a new for herself, Jill Valentine. However, Jill had a fire in her that the crowd had rarely seen, and the old Sage couldn't stand up to the Sandwich Cutter, ending the match in a 2-0 loss. The crowd jeered Impa, who still hadn't scored a singles victory since her debut in Season 2.

Season 5 started as most seasons had so far for Impa: in defeat. They faced the nWo for a place in the Co-op Tag Team Contenders Tournament, and were easily defeated. Impa tried to earn a win by bringing Zelda out to manage her match against the Wii Fit Trainer, but in complete frustration at Impa's inability to win, Zelda left the match halfway through, leaving Impa to wrestle alone. Despite this, or perhaps BECAUSE of this, Impa fought on hard, with the match going back and forth, until she was finally able to take down the Virtual Muscle Master and score her first ever singles win.

Impa confronted Zelda for an explanation. Zelda tried to explain that she believed Impa fought better when angry, fighting through the pain of her bad joints. Impa tried to wrap her head around the situation, but then, from the corner of her eye, her eyes locked with another. A man known as Mr Satan. The attraction was instant. Their hearts fluttered, their knees creaked. The two decided to go give their weary bones a rest by taking sit down together in private...away from Zelda and Videl, who were left standing speechlessly as the pair of joint-crossed lovebirds whisked away.

The pair spent the next few weeks together, happily idling time away. The two were inseparable. So much so that neither Zelda nor Videl were able to get them to focus on managing their matches. Both Zelda and Videl were losing their matches, suffering from not having their partners nearby to aid them. Zelda believed that this fanciful "love" was not the Sheikah way. Finally, Zelda and Videl confronted the happy couple, demanding they break up and focus on their wrestling instead. Shocked and angry, Impa refused, and accepted Zelda's challenge at Breakdown F.I.V.E. If she won, she would quit wrestling and stay with Mr Satan happily. The winner of the match would have their way.

Impa's match was booked very late on the card, just after the fight between Terra and Grunty. Impa and Mr Satan approached the ring while Terra was busy beating on Grunty, and Impa climbed into the ring to break them up. However, this was the moment that Grunty's power could be contained no longer, and she exploded in magical energy. The blast reversed Grunty's magic, returning her to her old, chubby self. Meanwhile, the excess magic found a new target: Impa.

The elderly Sage was completely different. Gone were the creaky knees and aching back. Now, she was younger, nimbler and faster than ever before. Zelda came out to challenge the new Impa, and found that she was nothing like she was the first time they'd fought. The Sage was in the prime of her life, and was more than able to handle her student. Zelda was forced to use the Triforce of Wisdom mid-battle to turn into Sheik to even the odds, but even that wasn't enough, and she fell to the Shadow Death Drop, ending their feud.

Impa stood victorious in battle, but not in love. Her new, healthy knees had nothing in common with Mr Satan's old rusty pair, and he broke up with her then and there. Like many great love stories, this tale ended in tragedy. And wrestling.

Impa attempted to break things up with Zelda, as per their agreement, however Zelda asked Impa to reconsider. Now that Mr Satan had broken up with her, there was no need for her to quit like she had said she would, and Zelda asked if she wanted to reform their tag team. Impa agreed, and the new and improved Last Sheikah strode out to the ring to the familiar Goron rap. They took part in a Tornado Tag Team Match against Jet Set Radio, but despite their past troubles with tornado tag matches, they stood strong and were able to score the victory against the punk pair.

Impa came out in a later episode to face off in a triple threat cage match against Mavis Beacon and Meryl Silverburgh. With the crowd cheering Impa's name instead of booing it, she knew she would have to work to keep up her momentum. She took on the pair strongly, and chose to flee the cage at the same time as Mavis. Despite Mavis starting the climb faster, it was Impa and her superior knees that would climb up quicker, and she escaped the cage first, winning the match.

Impa shown by Tina how it's done 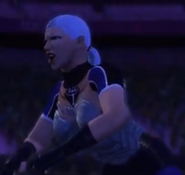