Ganin is a wrestler in VGCW who acted as a loyal henchman for Ganondorf.  He is best remembered for taking a stunner from Duke Nukem.

Ganin made his debut on 2013-11-11 , through the online social media of Twitter.  Originally posing as nothing more than a joke, Ganin would later take to ring to show the world that he was no joke.

On 2013-12-10, Duke Nukem entered the ring to face Ganondorf in a rematch.  However, he wasn't greeted with the presence of the Dark Lord.  Instead, Ganon had hatched a genius plan to send Ganin out to the ring.  Upon meeting an obviously displeased Duke, the two exchanged words, leaving Duke furious.  Flipping off Ganin, Duke proceeded to put Ganin into the stunner.  He lay on the mat, crippled, and we haven't seen him since.

Nobody knows where Ganin's illustrious career will go from here.

"Ganin's" CAW originated from a joke posted on TheTOH's Twiiter.  Over the transition from WWE'13 to WWE 2K14, the task of creating Ganon was obviously going to be quite the challenge.  Jokingly, TOH posted an image of Ganin to his twitter, stating that "Progress was going smoothly!".  The image was, in fact, the default superstar with "GANON" painted across his chest in big, black letters. 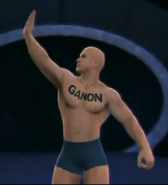 Ganin from the front 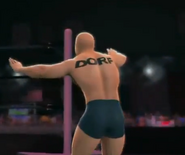 Ganin cuts straight to the point

Ganin looks in disgust as Duke gives him an unsightly gesture
Add a photo to this gallery
Retrieved from "https://vgcw.fandom.com/wiki/Ganin?oldid=33948"
Community content is available under CC-BY-SA unless otherwise noted.