Start a Wiki
"Jeez, you're persistent. You're probably wondering about my hair, aren't you? That's right. I'm as bald as a bean."

Flint is a playable character from Mother 3 and a wrestler in VGCW. As a member of Space Cowboys, he searched for the Dragon Balls with Nappa to revive Vegeta. After being rescued from life as a robot, he partnered with Barret Wallace in the tag division until Barret left the company. Flint turned on him on his way out to align with M.Bison, and now works for Senator Armstrong as one of The Sons of The Patriots after Bison's death.

A prominent citizen of Tazmily Village and consummate family man, Flint is husband to Hinawa and father to twins Lucas and Claus. Despite his life as a humble farmer, Flint can be a fierce fighter when his family and village are threatened, most notably when he defeated a giant robot dragon armed with nothing but a piece of wood and its own tooth.

Flint made his debut on 2013-04-26 against the Pyro. Pyro went to ridiculous lengths to spoil Flint's debut, including using a noclip cheat through most of the match and trying to lay out Flint with his own finisher, the Power Smash. Flint, however, refused to do the job to some filthy pigmask and laid Pyro out with a second Power Smash, securing a win and a memorable debut. Flint also participated in the King of the Ring tournament. He managed to defeat Ezio in the first round, but was dunked by Charles Barkley, who would go on to win the tournament, in the second round. Despite his loss, Flint still proved that he is a threat in the ring.

He later competed in two consecutive 6-man Battle Royals to determine a #1 contender for the VGCW Championship but won neither of them. The first one was won by Groose on May 15th, 2013 and while he didn't win, he left a good mark to The Pyro after he outlasted him. He did even better on the second one that was held two weeks later, eliminating both Ryo Hazuki and the Angry Video Game Nerd and reaching the final two opposite Mike Haggar. Though Flint put up a terrific effort, landing his finisher on the Mayor no less than three times, it wouldn't be enough to put his opponent down and he got pinned after being hit by a finisher and thrown off the top rope.

Flint would make his first appearance of Season 5 against Adam Jensen, and both were evenly matched early on, with Flint getting a good advantage, delivering two superplexes rather quickly. But he is unable to capitalize, and Jensen doesn't waste time going for small-scale moves, instead resorting right for a chokeslam. After a failed pinfall attempt, he hit Flint with the Augmented Tombstone, leading to a three-count and another defeat. Later, he would be wandering backstage when he would overhear Nappa talking to himself about teams of two searching for the Dragon Balls, and being defunct of a partner due to Phoenix Wright turning heel and Vegeta's death. Flint takes pity on him, saying that he knows what it is like to lose someone they care about too soon, and that he will help Nappa search for the Dragon Balls.

During the 2013-07-26 show Flint and Nappa tracked the Two Star Dragon Ball to discover it was under Scorpion's possession. Nappa suggested mugging him for it, but Flint, being the humble man that he was, convinced his partner not to resort to such petty thuggery. So Nappa challenged Scorpion in a match for it, and won. Then on the 2013-08-23 show, Flint mentions that Waluigi and Segata Sanshiro each hold a Dragon Ball. Nappa again suggests a 2 on 1 fight against each ball holder, but Flint trying to avoid unsportsmanlike behavior, convinces Nappa to search for other balls instead. Sadly for him, the ball they do find on 2013-08-30 is held by Donkey Kong. The cowboy challenges the ape, but fails to win during the Kong's streak.

Later, the two are approached by The Practice who claim that they're going to take Nappa's Dragon Ball without having to lift a finger. Confused, Nappa and Flint shrug it off. However, the Doctor's have convinced Knuckles that Flint & Nappa are going to summon the Dragon for evil reasons, and the Echidna approaches them, only to be cut off by Sonic. However, the determination of Knuckles is too great, and he gets himself in a Backstage Brawl with the Space Cowboys, only to be outgunned. The odds are evened when The Practice teams Knuckles up with Air Man, but the two fail to defeat the bald team.

After that affair, Flint leads Nappa to the sixth dragon ball held by Proto Man. Nappa challenges him, but let's him chose the match type. Glitch Man chooses a Steel Cage Match, and wins, only to later be killed by Air Man obtaining the dragon ball from his body for The Practice.

During a quiet time in the Dragon Ball Hunt, Flint had matches against both Dr. Wily and Phoenix Wright, but, despite showing tremendous fighting spirit, lost both matches. But then the hysteria breaks out and Safety Valve attacked, and stole, The Practice's Dragon Ball. Learning of this, Nappa convinces Flint to go against sportsmanship to try and take all of Wario Ware's dragon balls in a brawl. They were successful, and at End Game 5, they challenged Safety Valve for all their dragon balls and won, giving them all seven of the Dragon Balls.

In an effort to make sure Nappa can safely wish Vegeta back to life, Flint tells Nappa to go off and privately make the wish while he pretends to be holding all the Dragon Balls himself. This fails as Flint finds Nappa unconscious from an attack by Kefka Palazzo, who takes the Dragon Balls to the ring and summons Shenron, who uses the wish to become a God, then killing Shenron. Unwilling to accept this outcome, Flint and Nappa, along with Wario Ware, The Practice, and Safety Valve, mount an assault on the now seemingly unstoppable Kefka. Flint was able to last the longest out of everyone and managed to land his finisher on the Clown before being taken out, along with the rest of the Dragon Ball Hunters. This resulted in a last ditch effort by a dying Shenron to grant Nappa his wish, and bring the Saiyan Prince back from the dead and into the ring with Kefka. After absorbing enough power from the newly-revived Vegeta, Shenron destroys a barrier Kefka created to fend off everyone, allowing Flint, along with everyone else, to finish off Kefka.

Now that Nappa and Vegeta are reunited, it seems that the alliance formed between the Saiyan and the Cowboy is over, although they're very likely to remain on good terms.

Season 6-7: Curse of the Mole CricketEdit

Despite being very involved in the hunt for the Dragonballs, Flint didn't compete in many matches during Season 6. His first appearance was in a casual title #1 contenders match, where he was eliminated 4th by Ezio. He didnt make another appearance until January 14th when he was defeated by Tingle in a singles match.  Flint started his Season 7 career against the newly turned heel Guile in what turned into one of the most dramatic and crowd-splitting singles matches of the Season. It was during this match that the crowd cheering Flint came together, proclaiming him as "The True American", to go against Guile, who had become "The Communist". Despite losing the match, Flint had once again proven his extreme heart.  Looking to come back, Flint entered a Fatal Fourway with Wario, Sonic, and Kefka on 2014-03-04.  Unfortunately for Flint, he would be eliminated first by Wario. After taking nearly two months off, Flint would return in singles competition against Red, but despite Red's great difficulties in the past several months, Flint would be unable to take advantage and would lose again.

Flint was forcibly converted into a cyborg by The Practice. He once again wrestled alongside a cyborg Nappa, in a twisted mockery of their glory days in Season 5. They did battle with Grey Fox and Barret Wallace, dominating the two. At End Game 8, Super Metal Arino absorbed Flint In Steel along with the other cyborgs, and after his defeat, Flint was restored to human form.

Season 9: Return of the Godslayer Edit

After being returned to a human, Flint began a tag team with Barret, whom he had a connection with due to being a father, as well as having a gruff exterior. This new tag team took a while to find their groove, losing to the likes of The Mavericks, PK Chu, and The Practice. After working their way back towards the top, they did fight PK Chu for the belts, after beating The Dragons to become #1 Contenders. However, luck wouldn't have the belts in the cards for Barret and Flint, as they would fall again to Red and Ness.

Outside of tag team competition, Flint took on Knuckles in a Last Man Standing competition on November 18th. After putting up a fierce fight with the Echidna, Flint brought the first match of the night to a close with a Power Smash, pile-driving Knuckles into the mat, and earning Flint a victory. Coming off of his win, he fought in a Triple Threat Elimination the next week, but he would only be met with defeat.

Flint had a match early on in Season 10 against Octodad, which ended in a victory. His next match would be much more intense, as the Cowboy went up against the newly-hired Professor Layton. Flint took offense to the Professor's condescending ways, and went on to completely destroy Layton, hitting him with three Power Smashes, sending him through Table-san, and pinning him soundly.

After this win over the new comer, Flint would hit a streak of losses, starting with a tag team match against Toejam & Earl. Though Barret would take the pin, Flint wasn't able to save his partner. Following this, Flint was entered in a Fatal Four-Way Ladder Match for the Casual Title, but Kefka would end up stealing the win away from everyone. After taking another loss, this time to Sonic & Knuckles, Flint aspired to take on the Casual Belt once more, and was entered into a Six-Man Elimination contenders match. Flint would make it to the final two, but in the end he fell to a very loose Groose, who would go on to win the belt.

Finally, on 2015-06-02, Flint came out with Barret to do the impossible. After nearly three months of losing, Flint decided to break his streak, by pinning Air Man, nonetheless. Flint finished out Season X by leaving a big mark on his record, and he picked up a win for his team on the way.

Flint's Season 11 debut wouldn't be able to carry over the momentum of his previous win, as he would fall to Knuckles in a Six-Man Ladder Match to open the show. A couple of weeks later, Flint would fight the Birds of Prey for the first time with Barret. Flint's tag start wouldn't go better than his initial Season 11 debut, and he'd be met with a loss again. 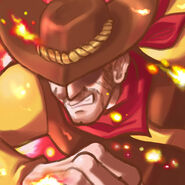 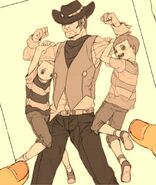 Add a photo to this gallery

Retrieved from "https://vgcw.fandom.com/wiki/Flint?oldid=40300"
Community content is available under CC-BY-SA unless otherwise noted.