"It must be contract renewal time."

Faith is the protagonist of Mirror's Edge and a wrestler in the Female Division. She and Chell form the tag team, Still Alive and are the former Gurl Co-Op Champions, holding the record for the longest title reign across all divisions at 393 days.

Faith is the main character of Mirror's Edge, a first-person platforming game released developed by DICE and published by EA in 2008. In it, she is a "runner", delivering messages on foot in a dystopian future city under totalitarian rule, who sets out to save her sister and discover the mystery behind the Icarus project. While the game had huge critical excitement leading up to its release, praising its art style, original parkour-based gameplay, and interesting female protagonist, the game suffered from underwhelming sales. Despite a possible sequel's status constantly switching between 'in development' and 'forgotten', the game seemed destined to remain nothing more than a cult hit. That is, until a sequel was confirmed at E3 2013. Hopefully this one will do better than the original.

Faith premiered in the 2013-05-28 show in a match against Rydia. While most of the match was fairly even, everything went bad for Faith when she attempted to put Rydia through Table-san. Rydia reversed her grapple attempt, then sent Faith through the table herself, causing her to lose by count-out. While losing your first match is always disappointing, Faith proved that she brought the core mechanic of Mirror's Edge with her to VGCW: dying when you're right on the verge of doing something cool because you messed up once.

Still, her performance in the match was good enough that she was deemed worthy of participating in a six-woman Battle Royal match held on the Season 1 finale, along with Tina Armstrong, Chell, Videl and, of particular importance, Bayonetta and Ivy. Faith performed admirably in the match, holding her own against Chell and eventually reaching the final three. Once there, however, the odds turned against her when both of her opponents did. Though the truce was broken before Faith could be eliminated and Faith held on to the best of her ability, the sustained offense from the two women, including a Witch Time combo from Bayonetta, was eventually too much, and Faith ended up pinned by Bayonetta. Despite being 0 for 2 in the league by that point, her performance in both her matches hinted that there was a skilled fighter underneath, a theory she gave some support to on the season 2 premiere when she won her match against Jessie. Though her opponent came to the ring with a manager in tow and though said manager attempted to distract both Faith and the ref on multiple occasions, Faith kept her focus and prevailed over her opponent.

After the announcement of the Tag Team division, Faith allied herself with Chell to enter the race of getting the Tag Team gold. Their first challenge was against newly formed The Witches Three members Bayonetta and Terra Branford. As the match began, Chell and Terror had a back and forth struggle while Faith interjected from time to time. As the match went on, Faith landed her finisher onto Bayonetta while being outside as Chell and Terror went back in the ring to continue their match. As Chell got speared by Terror, one wondered if Chell would get up. That she did and continued to fight on, regardless of her almost being out for the count. Soon afterward, a hot tag was made and Bayonetta made her way in the ring and landed a Witch Time to Faith. Later on, Faith hit Bayonetta with a DDT and put her out for the count, making use of her Finishers being applied to her early on. And with that, Still Alive claimed their first Tag Team win against one of the favorites to win it.

With the Tag Team tournament progressing at a fast pace, Still Alive found themselves against Devil's Advocate, a team everyone considered to be future Champions. Once the bell rung, Chell and Morrigan had a back and forth brawl as Chell had enough and eventually tagged in Faith. Once Faith was in, there wasn't much help from Chell aside from a few Tag Team moves. As the match went on, She-Hulk entered and Still Alive tagged both in and out to wear out the Lawyer. With the match in the mid-way mark, Faith found herself fighting against She-Hulk and Morrigan with small help from Chell. Although She-Hulk hit Faith with a Sunday Driver, there wasn't a single ounce of giving up as Faith kicked out. While Faith landed amazing offense against She-Hulk, Chell accidentally hit Faith with a neckbreaker. Perhaps Chell wasn't used to Faith yet. Regardless of that incident, Faith was still in the match against Morrigan as Faith landed amazing offense and forced Morrigan to get She-Hulk in. As She-Hulk grabbed one of Faith's legs and almost went for her finisher, Faith reversed it and landed her own finisher to make Devil's Advocate enter spectator mode. With this amazing win, Still Alive now has a clear line to a #1 Contender's match against Cobra Twonit for a shot at the gold. Without any dead weight in this team and with their ability to come back, can they once again get a win and make their dominance known once more?

Still Alive would face the Cobra Twonit for a shot at the tag team belts, but despite a strong start the pair fail to finish it off. Chell takes a nasty slam through Table-san and takes the fall from The Boss. Still Alive's first shot at the Co-op Championship ends in a failure. Though no one knew it at the time, this loss was quite unique to Still Alive. Next month, Still Alive would find themselves in another contenders match against Camstrings. Though Chun-Li went out easily enough, the two would struggle to finish off Cammy, who refused to go down despite being in a 2 on 1 fight. In the end, Still Alive took the win, and took the contendership.

The Co-op Championship was about to be changed forever.

Season 3 didn't start off too well for Faith as she went up against the strong Princess Daisy. Despite an even match, the power of devils was able to keep the agile Faith down on the ground and the match ended with a Daisy Cutter. Faith and Chell would come out to fight their old enemies, the Cobra Twonit, who had used the contenders match they gained from beating Still Alive to become champions. Just like with Camstrings, one fighters, Meryl, is eliminated early on. The Boss put up a valiant effort, as expected of a champion, but the handicap is too much. Still Alive become the Champions on this day.

As one half of the tag team champions, Faith would attempt to push her solo career. She went up against company physician, Wii Fit Trainer, who had clearly not warmed up enough for the match and quickly tapped out. This quick win was enough to give Faith a place in the 6-woman Casualette Championship match at Breakdown 2/3. In the end, Chie won the belt, but Faith still had her Co-op Championship to fall back on.

Season 4: It's Not Champion Renewal Time.[]

The Last Shiekah won the Co-op Contendership at Breakdown 2/3, so the first match of Season 4 involved a Championship match between them and Still Alive. It was another Tornado Tag Team Match, as was Still Alive's strongest match type at this point. Once again, they broke apart their opponent separately, with Faith making a very strong showing against Shiek, while Chell got the pin against Impa. A fight against Princess Zelda, perhaps her attempt at revenge, would lead to another victory for Faith, who was starting to capture people's attention. A fight against a topcarder was in order, so she was put against Lightning in a tables match. In the end, the match type gave Faith no advantage. She choked going up against such a strong opponent, and was crushed quickly, leading to a great deal of boo's against Lightning and disappointment.

As always, Faith had her Co-op championship to fall back on. At Breakdown IV, Still Alive faced Saints Roll in defence of their title. Chell was going to be taking on Ayla for the WVGCW title later in the show, so Faith would be expected to show what she could do here. Once again, in a Tornado tag team match, with parkour ladders thrown in, Still Alive dominated in the end. Though things were even for a while, both Faith and Chell ended up demolishing Saints Roll and retaining the belts. It was becoming clear to everyone that Still Alive were nigh unstoppable. There didn't seem to be a single team in the league who could stop them.

Certainly not RPGenie, the new and inexperienced team that had lost their Breakdown match quite badly, right?

With Chell as the reigning WVGCW Champion, Faith wanted to work even harder to stand out from her influence. She took part in a fatal fourway match where she dominated strongly, showing off why she was reigning Co-op Champion. However, another fighter in the ring was also making a strong showing, RPGenie member Shantae. Faith and Shantae would end up as the last two in the ring. Faith would unleash everything she had on Shantae, but at the end of her assault, Shantae would reverse her moves and get the perfect chance to launch an Elephant Slam, taking Faith out for the count. This little fight with Shantae was only the beginning of a much bigger relationship.

Faith wouldn't be seen until the next Co-op Championship Match against the rising stars RPGenie. It was a close and bloody tables match, but during the fight, Shantae would be made immobile by Bayonetta's Witch Time. It may never be known if things would have been different had Shantae not been immobilised, but in the end, Still Alive would once again retain their belts, but this time with a more sour taste in their mouth.

Faith would call out the New Witch Order for their actions, and end up challenging Sindel to teach her a lesson. However, like with her last attempt at challenging the topcard, this went poorly. Despite a strong showing, Sindel was in control the whole fight, and took down the Co-op champion. Still Alive agreed to a rematch with RPGenie with no Contenders match needed at Breakdown F.I.V.E. This was perhaps the most brutal and exhausting fight that Still Alive had ever had. 20 minutes of non-stop beating. Faith was able to take on both Lucina and Shantae, and nearly scored the pin on Lucina several times, but was always cut short just before the 3 count by Shantae. In the end, while Faith was distracted by Lucina, Shantae scored the pin on Chell and brought an end to Still Alive's title reign.

For just over a year, Still Alive had held a dominant rule over the Tag Team division, with the longest title reign of any champion in WVGCW or VGCW. Now Faith has no title to fall back on, she may be forced to go running on her own solo career, while comforting her friend Chell, who lost both her titles on the same night. 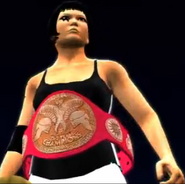