Eddie Riggs is the Protagonist from Double Fine's Action / RTS game Brütal Legend and a wrestler for EDBW. He is a former EDBW Hardcore Champion, but was removed from the active roster late in Season 3 for losing a Purge Match. However, he made a surprise return late in Season 4 to win the Royal Rumble, and subsequently defeat Liquid Snake to win the EDBW Championship at Killscreen IV.

Eddie Riggs is the greatest Roadie of all time, and an old school metalhead pining for the days of old when Heavy Metal was pure. During a concert for the worst heavy metal band of all time, Eddie is tragically killed saving one of the band members by a part of the set crushing him instantly...that is, until some of his blood summons the Eternal Fire Beast Ormagoden and Eddie is sent back in time to the Age of Metal. It's here where Eddie meets a young woman named Ophelia, a member of a group of freedom fighters determined to free the world of the evil Emperor Doviculus and his millions of demons, and Eddie joins the rebellion, proclaiming it to go by the name Ironheade (spelled with an E at the end to let people know they mean business).

Despite being immature at times, and mostly snarky the rest, Eddie has a good heart and a strong sense of justice, and would stop at nothing to defeat Doviculus and save his friends. Also, he's voiced by Jack Black.

Season 1: You Say You Want a Revolution?Edit

Season 2-3: The Downfall of The MetalEdit 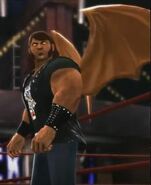 "Lars...I'm already a Demon."
Add a photo to this gallery
Retrieved from "https://vgcw.fandom.com/wiki/Eddie_Riggs?oldid=38467"
Community content is available under CC-BY-SA unless otherwise noted.