Start a Wiki
Double Dash!!, formerly the Damsels of Distress, is a tag team made up of Princess Daisy and Princess Peach. Their old tag team name is based on the consistent damsel in distress stereotype Princesses in the Mushroom Kingdom seem to suffer from. In this instance, these Damsels are the ones causing distress rather than suffering from it. Their current name is based on the game Mario Kart: Double Dash!!, in which two racers share one kart, similar to how they make their way to the ring.

Season 2: From the Other Side of Darkness... Edit

While both competitors shared a Mushroom Kingdom history, the two had never crossed paths in the ring or backstage during the first season. It wasn't until the Season 2 premiere and the formation of the female tag team division that the two royal sisters-in-arms would cross paths. At the behest of the general manager and head of the V.I.L.E.C.W. Carmen Sandiego, Daisy would need to find a tag team partner to compete in the new division. Exuberant and full of excitement, Daisy left and knew exactly who to get as her partner. Meeting a very frightened Princess Peach in the backstage area, Daisy would make her cooperate through force while gleefully shouting her staple "Hi, I'm Daisy!" phrase.

The Damsels of Distress would debut as a tag team on 2013-07-23 with Daisy and a very different, much darker Peach. Their first match as a team would be against the team of Android 18 and Lightning. Expected to make short work of the 18 Volts, the Damsels took a commanding early lead. Whatever Daisy did to Peach to transform her had seemingly given the dark princess great power as she dominated the majority of the match. Daisy herself however struggled greatly in the match, perhaps unprepared or weakened after converting Peach, Daisy simply could not get any momentum going. Their opponents took advantage of the reliance on Shadow Peach for this fight and were able to single her out with many double teams, weakening the nightmare enough for a pinfall, giving the Damsels an unexpected loss in their debut match.

The princesses would work together under Carmen Sandiego before betraying her and helping to bring about her downfall. The darkness that had taken Peach, however, was not controlled so easily, and the pair continued to fight as a tag team, working only for themselves.

The Princesses struggled in their singles careers for a while, until they finally returned to the ring together to face the newly formed New Witch Order. Despite their struggles so far, it was clear that the extra time that Peach had taken to get used to her new form had helped her a lot. The confusing cluster of the match was brought to a halt with a sudden Cake Cutter that took Bayonetta down.

By this point, the princesses were clearly growing stronger by the day. They proved themselves once again in a victory over 18 Volts, who they had lost to before. They didn't care for what the audience thought of them, and they proved it with a strong victory over the newcomers Jet Set Radio. During this season, Chie Satonaka and Elizabeth worked together to defeat Shadow Peach and bring an end to her terrifying reign. In the end, the two were able to defeat Shadow Peach, rescue the regular Peach, and bring an end to the evil of The Damsels of Distress, leaving their future in the shadows.

The regular Peach knew it was time for a rebranding. The pair did away with their grim and depressing shadowy image, and restarted their team as Double Dash!!. The peppy team's first battle was against the newly made team, Space Court, and their experience as a tag team made all the difference as they took the win. This qualified them for the Co-op Championship Contenders Tournament, where they faced Mad Gear and took a smooth victory, before coming up short against the far more powerful than before nWo.

Next week, they faced off in a match against the Wright Anything Agency in a match to determine the Third Place Winner of the tournament. It was a close battle, with both teams showing a lot of heart, but in the end, Double Dash!! were forced to hit the brakes as the agents took the victory. They showed up again next week with an even more difficult battle against the winners of the tournament, RPGenie. Due to some great teamwork, and some strange outside interference, the princesses managed to score a big win against the tourney winners.

This win put them into a match to decide who would fight for the Co-op Contendership at Breakdown F.I.V.E. They took on 18 Volts once again, but even without their dark powers, the princesses went charging through the duo and went on to fight Steak Machina at Breakdown F.I.V.E. Despite their impressive lead-up, it all went wrong during the PPV, and Peach was never able to get any proper offence on the powerful Aigis, leading to their defeat. Second place again!

Season 6: Exercise Can Be Bad For Your Health Edit

The pair went storming back into action in Season 6, and took on Mad Gear in a regular match. But the royal two had no time to waste with the gangsters, and took them both down within ten minutes, greatly impressing the crowd.

After a nasty few singles battles, seeing Peach lose to Cooking Mama and Daisy lose to Wii Fit Trainer, the two duos decided to settle things at the Money in the Bank PPV together. Peach and Daisy took on the newly formed team of Diet and Exercise, but despite a good showing, they once again fell short against the healthy pair, and lost the match, ending this particular feud without a single win. 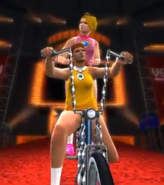 Their brief appearance in regular clothes as "Double Dash!!" before adopting their Halloween "Strikers" attire full time.
Add a photo to this gallery
Retrieved from "https://vgcw.fandom.com/wiki/Double_Dash!!?oldid=38959"
Community content is available under CC-BY-SA unless otherwise noted.