What makes me a good Demoman? If I were a bad Demoman, I wouldn't be sittin' here, discussin' it with you now would I?

The Demoman is a playable character in Team Fortress 2 and a wrestler in VGCW. He is a graduate from EDBW, and is a member of the stable The BLU Rogues along with fellow EDBW call ups Guybrush Threepwood and Vyse

Tavish Degroot hails from a long line of Scottish Highland Demomen. He is an expert at the creation and usage of explosive weaponry, such as his grenade and sticky-bomb launchers. In spite of (or maybe because of) his constant state of intoxication, Demoman is a formidable fighter; he is able to fight with Scottish great-swords and even empty bottles in addition to his explosives. Despite his great skills and even greater paycheck, his mother looks down on him as any demoman worth his sulfur wouldn't have a single eye in his head past 30.

The Demoman exploded into the main show on 2015-08-18 alongside the rest of the BLUE Rogues. The pirates' arrived right in the middle of Groose & His Gang of Bullys (who include Demoman's old friend, Heavy in their ranks). Groose was wanting a match and the Rogues were ready for one. Sadly the PS3 was not, and the start of the match was delayed due to technical difficulties. Demoman must have passed out during this intermission as he and Heavy were absent when the match returned. Demoman would finally appear in a match on the next show where he made his debut proper against Kefka Palazzo. As always Demo put on an incredibly entertaining show, even managing to score the first pin in the 2/3 fall match, but still Kefka managed to edge out a victory. However this early loss doesn't seem like it will have much effect on his prospects or popularity. 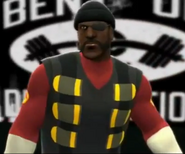 The RED Demoman
Add a photo to this gallery
Retrieved from "https://vgcw.fandom.com/wiki/Demoman?oldid=37884"
Community content is available under CC-BY-SA unless otherwise noted.