This party is about to get CRAZY!

Dante is the protagonist of the Devil May Cry series and a former wrestler in VGCW. He was known for fighting against his own alter ego, Donte, who is based on the redesigned Dante from the game DmC: Devil May Cry.

In Devil May Cry[]

Dante is the protagonist of the Devil May Cry series. He is a mercenary and demon hunter that dedicates his life to exterminating supernatural forces. Dante is also half demon and is capable of using demonic weaponary to aid him in his ventures. His arsenal usually consists of two twin firearms named Ebony and Ivory and melee weaponry such as his swords Rebellion and Force Edge. Dante possesses superhuman strength and agility that allows him to take on superior enemies. Dante is most noticeable for his white/silverish hair and his red trench coat as well as his rebellious attitude.

Dante's tenure in VGCW was far more Dull than it was Showtime. Most of his time in the league was spent floundering around as nothing more than simple Rumble fodder, with only one memorable showing in one of the earliest Rumbles, lasting for a good while and even eliminating four other wrestlers. The only victory he has to his name was when he faced Adolf Hitler... way back on November 19th in the first round of the earliest known King of the Ring Tournament. He lost to Gabe in the second round.

Following that, Dante would become allergic to success. His fall began when he failed to secure a Casual Championship title shot in a 6-man Battle Royal, being the first vidya eliminated in that match, before even Gary Oak. He shortly after lost to Arino in a First Blood match, giving the Kacho his first ever singles win.

It was then revealed on 2013-02-01 that Dante and Donte, previously thought to just be Dante cosplaying, were actually two separate people, as they were pit against each other in a Last Man Standing match. Decked in a new outfit and facing a tremendously unpopular wrestler the crowd wanted him to beat, this was Dante's best chance to break out as a SSSuperstar... but Donte beat his scrawny ass in like five minutes.

That loss was essentially the nail in the coffin of Dante's career. A complete lack of momentum and his fans jumping off ship following the loss to the impostor left Dante counting the days to Future Endeavors. He was a no-show for most of Season 3, only appearing in the Royal Rumble on 2013-02-28 and making an appearance backstage talking with Mike Haggar and Barret Wallace about Woody's absence from the 2013-03-07 show. Some noticed his choice ringwear had changed again since February, now being the one of DMC4 Dante, also known as Uncle Dante. Dante's final appearance was in the 6-man Battle Royal match on 2013-03-12 where he was the first one eliminated, again. 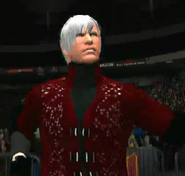 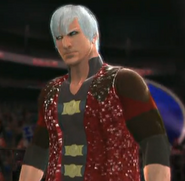 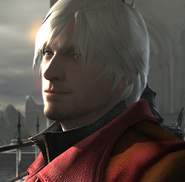 Dante backstage with Haggar and Wallace.
Community content is available under CC-BY-SA unless otherwise noted.
Advertisement