Commander Shepard is the main character of the Mass Effect series and a wrestler in EDBW. She originally debuted in SNST, and finally got brought into the EDBW roster at the SNST: One Night Stand event when she won her first Hardcore Championship. She would lose and immediately regain the belt twice during this period, ending Season 4 as a three-time champion, tied for the most reigns ever.

She was a member of both the trio Cerberus, alongside Morrigan and Ellie, and the greater organization Cerberus, under the Illusive Man.

In the Mass Effect SeriesEdit 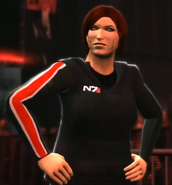 Add a photo to this gallery
Retrieved from "https://vgcw.fandom.com/wiki/Commander_Shepard?oldid=41027"
Community content is available under CC-BY-SA unless otherwise noted.